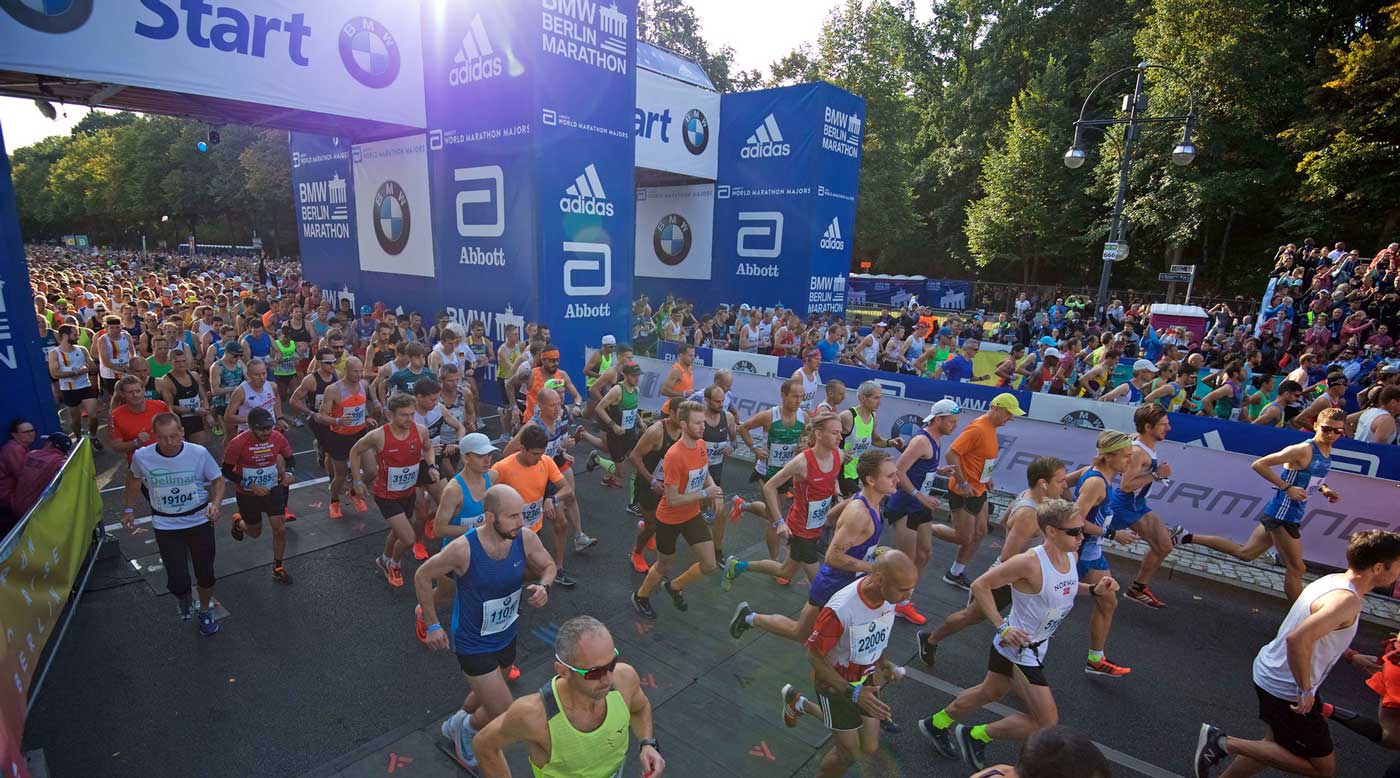 Are you running the BMW BERLIN-MARATHON in September? Be prepared for an unforgettable journey through theCity of Freedom.

The history of Berlin crosses your path wherever you go - including along theBMW BERLIN-MARATHON course. Many sights along the marathon course serve as reminders of the city's ancient and recent history. Runners will cross the former border between east and west - The Berlin Wall - four times on their way to the finish.The team in Berlin are busy making their final preparations for the 2019 race and have given us the essential info you need to make sure your race week goes smoothly, and that you have a lot of fun!

1. Pick up your race kit

Your BMW BERLIN-MARATHON journey starts with the EXPO at the former Tempelhof airport.

DID YOU KNOW? During the Cold War the Western Allies used this airport to overcome theblockade of West Berlin by the Soviet Union with an airlift to supply the people of West Berlin with food and other essentials.This historic place was the biggest building in the world and the first airport worldwide to be reached by subway.

Pick up your bib number and race kit and visit over 150 exhibitors. Details regarding opening hours and the exhibitors can be found on the officialEXPO website.

Tip: Don't miss the Pasta Party and keep your eyes open for our #berlinlegend photo spot.

DID YOU KNOW? On September 30, 1990, three days before reunification, the course of the Berlin Marathon wentthrough West and East Berlin, for the first time including the Brandenburg Gate, the symbol for reunification ever since.

The Gate is worth a visit before the race, too. Close to it is theHall of Fame, an event especially designed for marathon participants. It includes a store for official merchandise and has a huge wall of names displaying every single participant of this year's race. It opens on Wednesday, September25, and will host theMeet the Legendsevent on Friday evening (6:30 pm) before the race, starring invited athletes, former elite runners, Six Star Hopefuls & Guinness World Record contenders.

Tip: Be there on time to soak up the inspiration and motivation form the legends before Sundayand take the chance to meet and mingle with fellow runners.

Today's Berlin has become a multicultural city of endless possibilities and fascinating neighbourhoods to stroll through. TheGENERALI BREAKFAST RUN is the perfect way to see some of these as we welcome all the runners coming to Berlin from across the world. Join the run on Saturday, September28, and be one of more than 10,000 runners conquering the streets of Berlin.

The 6k jog starts at 9:30 a.m. and leads from Charlottenburg Castle and to the Olympic Stadium, where all runners will have the chance to enjoy a power-breakfast to recharge your energy reserves before race day.

DID YOU KNOW?The current men's 100m world record was set on this track byUsain Bolt!

Tip: Make sure to bring your phone or a camera and your national flag. Running on the blue track of the historic Olympic Stadium is very impressive.

4. Post-race party in the former eastern part of Berlin

All participants of the BMW BERLIN-MARATHON are invited to join theMarathon Partyon Sunday, 29 September, at 8pm. Berlin is famous for its vivid club life and who says runners don√¢‚Ç¨‚Ñ¢t know how to party? The first dance moves might be a little bit stiff, but keep in mind the others will feel the same.

Tip: Like all events surrounding the 2019 BMW BERLIN-MARATHON, the after-race party is something you just shouldn't miss.

Stay in touch with the BMW BERLIN-MARATHON onFacebook,Instagram andTwitter and share your Berlin journey to become a #berlinlegend.

Watch thecampaign video,Be A Berlin Legend -it will give you goose bumps!