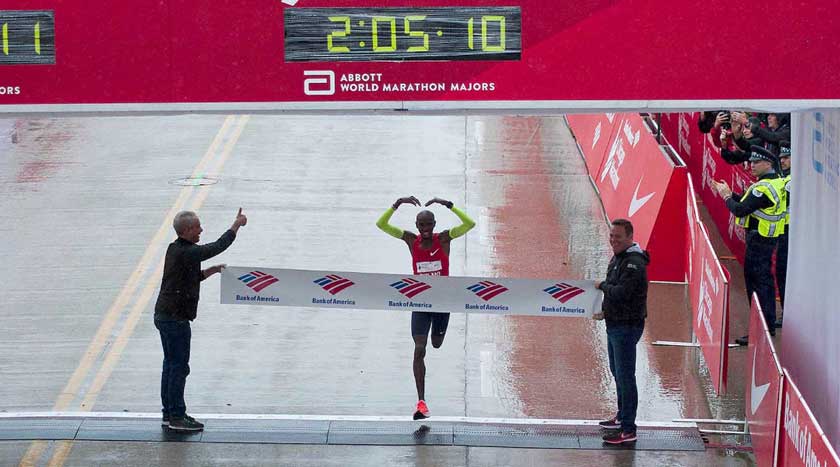 Chicago next for Mo Farah

Bank of America Chicago Marathon men’s champion Sir Mo Farah will return to the Windy City in October to defend his title.

The Briton ran a PB and new European record when he claimed his first Abbott World Marathon Majors race win in 2018, clocking the eighth fastest time in the race’s history of 2:05:11.

In a tactical affair, the four-time Olympic gold medalist looked comfortable as he surged away from the field late in the race. He recently followed that performance with fifth place in the 2019 Virgin Money London Marathon in a time of 2:05:39.

Farah’s return to the scene of his maiden marathon win will mark the start of Series XIII of the Abbott World Marathon Majors, which will come just two weeks after Series XII’s champions will be crowned in Berlin.

He will be joined by former stablemate Galen Rupp, the 2017 Chicago champion and Rupp’s compatriot Jordan Hasay, who made a successful return from injury in the 2019 Boston Marathon to finish third.

In the elite wheelchair competition, defending champions Daniel Romanchuk (USA) and Manuela Schär (SUI) are returning to capture back-to-back victories. Before then, both are on track to take the Series XII titles having maximized their point-scoring potential already with four wins and three bonus point victories.

“We are thrilled to have so many champions in this year’s field. Every elite field we put together tells a broader story about the sport – about the pressure to defend a title, the day in and day out commitment and grit of the world’s best athletes and the pain and beauty of a comeback,” said Bank of America Chicago Marathon Executive Race Director Carey Pinkowski.

“Winning the Chicago Marathon last year was very special for me,” said Farah. “It was my first time to win an Abbott World Marathon Major and my time was a European and British record. I am looking forward to returning in 2019 to defend my title on the streets of Chicago. It is a fast course with good organisation. I expect they will recruit a strong field to make it a great race.”

Romanchuk seized his first AbbottWMM win in Chicago last fall. He finished 2018 by becoming the first American male and the youngest athlete to win the wheelchair competition at the New York City Marathon. He welcomed 2019 with a runner-up finish in Tokyo and a pair of crowns at both the Boston and London marathons. The Virgin Money London Marathon doubled as the World Para-athletics Marathon Championships so Romanchuk added “marathon world champion” to his long list of accomplishments.

"The Chicago Marathon is so special to me,” said Romanchuk. “It was the first Abbott World Marathon Major I ever did, so I use it to gauge my progress over the years. I was shocked to win it in 2018, and I'm so excited to be returning again this October!"

Schär collected her sixth AbbottWMM victory in a row in London so she will enter this year’s race not only as the defending champion, but also as the reigning champion of the BMW-Berlin Marathon, TCS New York City Marathon, Tokyo Marathon, Boston Marathon and Virgin Money London Marathon.

“When I first started doing marathons in 2013, I remember a conversation I had with my coach,” said Schär. “We talked about all the Majors and the different courses. We said if I ever achieve my goal of winning one of the big marathons, it would most likely be Chicago. It is a fast, flat course. Exactly how I like it. Now it turns out that I did achieve my goal and win a major marathon, but Chicago was the last of all the majors. So it is a special relationship that I have to Chicago. My win last year was a very, very special moment.”