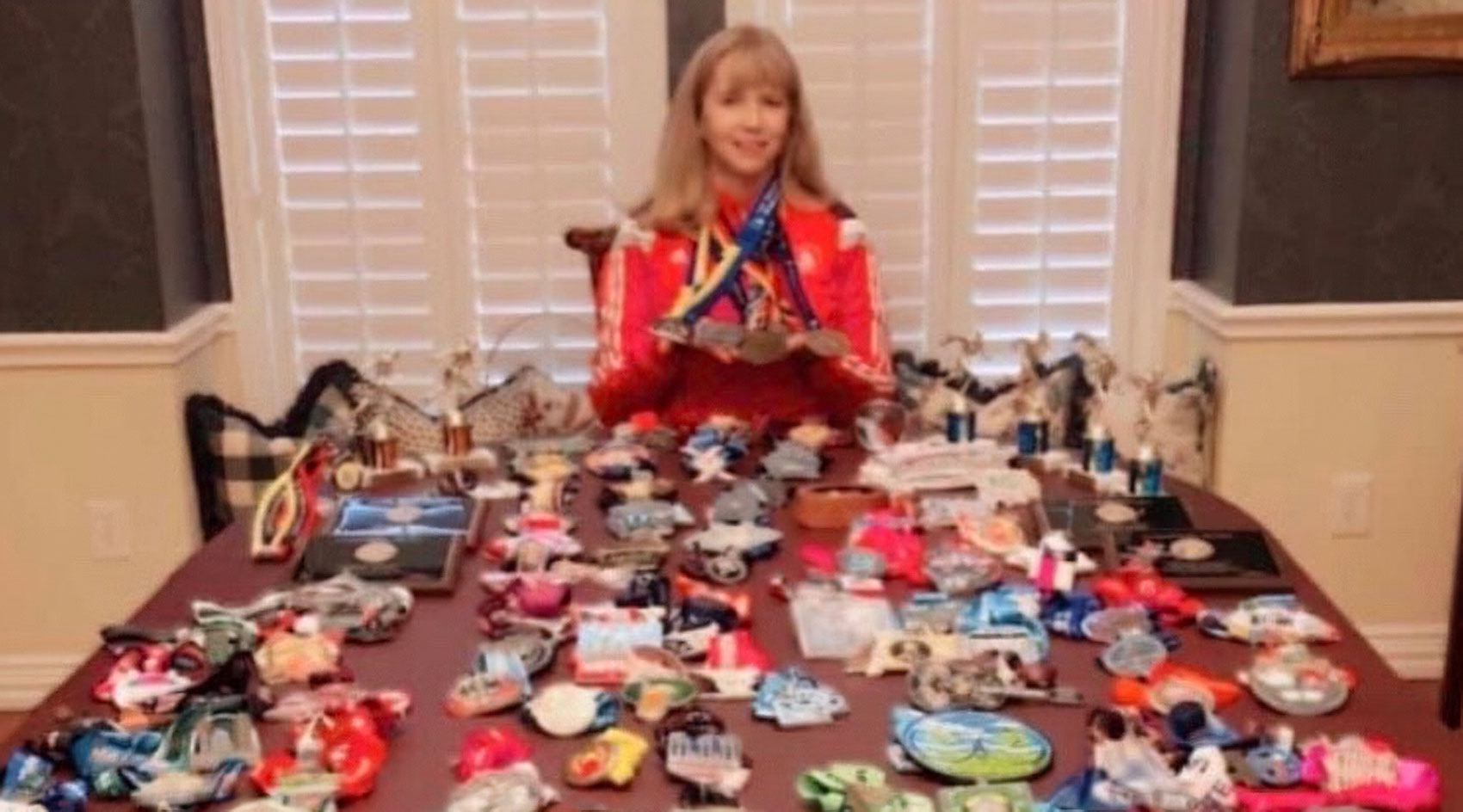 Claudine Nicholas has completed 75 half marathons, 14 full marathons and has collected more than 180 running medals and awards over the last ten years.

This is all the more impressive when you learn that the Dallas, Texas resident was diagnosed with a debilitating illness almost 30 years ago that would have a significant impact on the rest of her life.

Described as a ‘daredevil’ by her Italian mother, Claudine loved sports and adventure from a young age, doing everything from softball and soccer at school, to skydiving and jumping off the top of a moving cargo train while at university!

She explains: “I loved being active, but in my 20s my health began to slow me down. It felt like I had a constant flu with severe joint pain, fatigue, and fever.”

After three years of testing, at the age of 23, Claudine was diagnosed with the auto-immune disease Lupus. A few years later, the doctors also told her she had another chronic inflammatory disease known as fibromyalgia.

Claudine recalls: “My pain level skyrocketed and my spirit took a beating. All I did was work, go to the doctors and cancel social plans with my friends. My body just wouldn’t allow me to keep up and it really wasn’t an easy time. I existed without dreams and without hopes.”

To compound her bad health, she was then caught up in two major car accidents, damaging discs in her neck and back.

THE ROAD TO RECOVERY

After failing to find much-needed relief through prescribed medication, she turned to physical therapy and revamped her nutrition.* With a renewed feeling of energy, she discovered a positive outlook for returning to a more active lifestyle.

“I was given a dog by my neighbors and every day, no matter the weather, we walked. Diesel became an angel by my side and over six years we walked 3,000 miles together. During that time in 2004 a friend asked me to join a charity 5km so I accepted and walked for a worthy cause.”

Five years later, the same friend would convince Claudine to sign up for an eight-mile Turkey Trot where she decided to run.

She explains: “There were 40,000 runners at the Dallas Turkey Trot, and the energy of the crowd hooked me. I was also amazed to see 60- and 70-year-old runners passing me.

“I had no idea “old people” ran.  My finish time was terrible, but the race completely changed my outlook on life in an instant.  When I crossed the finish line, the joy was overwhelming.  Despite my soreness and exhaustion, I had loved every minute and knew the race was just the beginning.  I knew I wanted to be a runner.”

Becoming all-too familiar with people saying ‘you can’t’, ‘you shouldn’t’ and ‘your disability’; Claudine had started to believe them until she found running. She was not going to be defined by illness any longer. She had learned of runners completing amazing feats, so in her first year of running, 2011, she completed 17 half marathons plus a host of shorter distance events and she’s not slowed down since.

It was in 2017 when going for her Abbott World Marathon Majors Six Star Medal became her latest challenge.

“I saw a Facebook post of an unusual medal that caught my eye. It was the Six Star medal. As soon as I saw it I thought, ‘How awesome to travel the world and run at the same time.’”

Her first star and first full marathon was the TCS New York City Marathon (2016) which she says is still her favorite, even after running 13 others.

“Even in my dreams, I could not have imagined a better experience.  The WOW factor is off the charts with the sea of endlessly moving runners and the over-the-top support of the screaming sideline crowds.”

Chicago came next followed by Boston in 2018 which she completed in the challenging weather conditions and with two cracked ribs.

“My mother is from Boston so it was an important one for me to do while she was alive and I know that was one of the things she was most proud that I accomplished.”

Berlin came next and Tokyo 2020 was to be her fifth star, with London a few weeks later lined up to be the end of the challenge. These milestones have now been pushed back due to COVID19 but Claudine is staying positive and says:

“When I do become a Six Star Finisher, that medal will become all the more special to me, as I have worked, trained and overcome so much to achieve it.  It will be one of the most incredible days of my life, and I truly can’t wait.”

April of this year marked 29 years since Claudine’s Lupus diagnosis. Her years of studying nutrition led to her become a Certified Health Coach and Member of the National Association of Nutrition Professionals.

She says: “I wanted to empower others with what I had learned. I have also paid it forward with running and I help my friends realize their dreams of completing races they never thought possible.”

Not one to sit still, Claudine has her eyes set on finishing 100 half marathons and 100 full marathons covering all 50 US states and the seven continents.

“Runners are an incredibly resilient, tenacious group of overcomers, and I love being a part of that. We truly cheer each other on, and the crazier the dream, the better!”

* NOTE: ALWAYS CONSULT A PHYSICIAN AND GET A FULL HEALTH EVALUATION PRIOR TO MARATHON TRAINING. EVEN IF ATHLETES APPEAR HEALTHY, UNDERLYING MEDICAL CONDITIONS COULD EXIST.

Kipchoge rewrites the book in Berlin

Kipchoge back to reclaim Berlin crown