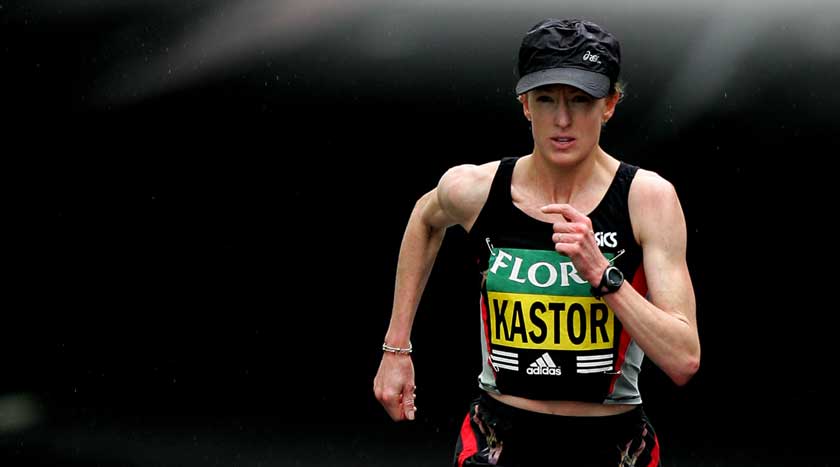 It can take a lot to lift the gloom of a drizzly day in London, but on just such a Sunday in April 2006, it was the smile from underneath the black cap belonging to Deena Kastor that lit up the UK capital.

A lot has changed in the world of running since then, but the mile-wide grin is still the same when the Californian recalls that achievement.

It sits alongside the 2005 Chicago Marathon title, Olympic bronze won in Athens in 2004, a track career that brought her 18 US titles and an American masters record of 2:27:47 that she set in 2015.

But Deena Kastor is not done yet. Next on her hit list is the Abbott World Marathon Majors Six Star Medal.

“I saw people getting this incredible medal and thought to myself: “I have an Olympic medal, I have the US record, but I don’t have one of those!”

That will change in Berlin on September 29 if she can successfully negotiate the flat, fast 26.2 miles of German tarmac separating her from her latest milestone.

Since conquering London in the spring of 2006, she registered sixth place in New York City in the same year and was fifth in Boston in 2007. Sixth place in Chicago in 2009 followed and she has since been back to the Big Apple and the Windy City, as well as a return to London in 2010.

Achievements in running do not come easy, and Kastor’s pursuit of the Six Star medal is no different.

Having safely tucked away four legs of her Six Star journey, Tokyo was where her hunt resumed in March of this year. Conditions were far from ideal as rain lashed the course from start to finish.

“Tokyo was run in horrendous weather," she recalls. “I got knocked down twice, and it was only three weeks later I realised I had dislocated my shoulder, but the Six Star medal made me want to get to that finish line.”

They breed them tough in Mammoth Lakes. That’s where you’ll find the 46-year-old gradually cranking up the mileage as she gets into what she calls the “meat and potatoes” of marathon training, following the plan devised by husband and coach Andrew and structured around life as a busy mom.

“Andrew will give me a month and a half window and say, ‘right, let’s see if we can ramp up the miles and get in those extra few on morning and evening runs’, but there are busy weeks when I can’t do that. Everything shows up when you’re a parent. When it comes down to it I want to excel in all of my passions and parenting is one of them.”

The thrill of feeling her body change and learn to cope with the load as a plan progresses remains, however, and it’s something she has never grown tired of.

“After 35 years in the sport, it still amazes me how beautifully the body adapts to training mode. You think ,‘Oh gosh, I’m not going to be able to do a 10-mile tempo run’, and in a couple of months you’re doing it. It’s very important to me to bear witness to how our bodies can go that distance. Any runner would attest to that weekend they do their 20-mile run, they just can’t believe that a couple of months earlier a five-mile run seemed impossible or daunting.”

Speaking of daunting; Kastor is the last woman who doesn't hail from East Africa to have stood atop the London podium. “I was always chasing the east Africans, learning and chipping away, trying to get better, and to do it in London, as well as lower my PB and American record; 2006 was an amazing year for me.”

To succeed at the marathon for as long as she has, you have to love the discipline. It was love at first sight for Kastor. “I took up marathon running to get strong for track in 2001,” the year she first ran New York.

“Then I realised how amazing the crowd was and when you put that together with the fact that we were all on that same start line and, from first to the last under the lights in Central Park, we were all in it together; I went all around the world running for my country and for times and there were people in the crowd cheering you on, but the marathon was something different."

That finish line in Berlin will bring something different again when she earns her Six Star medal, but you sense that it will not be the last of her acheivements on the roads. She is currently ranked 49th in the AbbottWMM Wanda Age Group World Rankings and a good performance in Berlin might just catapult her up the standings, which could earn her a shot at the title of Age Group world champion in London in 2020. Something else to work towards perhaps?

Her mindset would certainly suggest so.

“When we want something big and bold it takes one step at a time to get there. It teaches people a lot about themselves and their capabilities if they stay persistent at something."

Never a truer word spoken by a marathon runner.