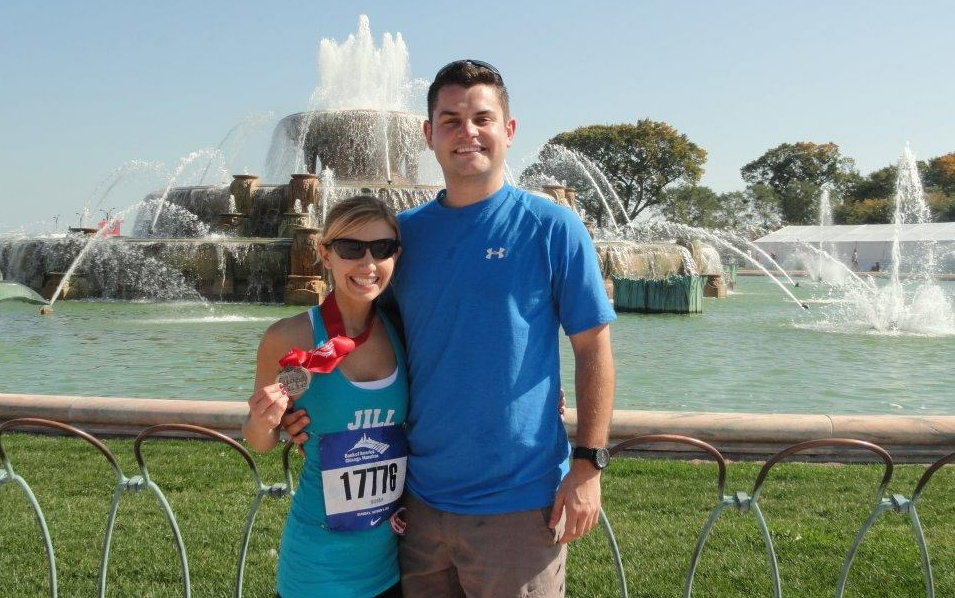 ‘I owe this to my husband'

If Jill Schumacher finds the going tough during the Boston Marathon on Monday, she has a couple of go-to sources of inspiration incredibly close to home.

The Abbott World Marathon Majors Ambassador's husband, Jack, lost his leg while serving in the US military in 2009. It was while on a tour of Afghanistan that a rocket-propelled grenade struck the vehicle he was in leading to his injury.

But he has been at every finish line of every AbbottWMM race as Jill pursued her quest to become a Six Star Finisher.

‘My husband inspires me,' she says. ‘He has been there from the start. I wasn't a runner when I met him. He inspires me to run and to reach for the unattainable. He's been at every marathon finish, from Chicago to London to Berlin to New York City and Tokyo.

‘He tells me he runs vicariously through me. He's my inspiration and he is the reason I qualified and am running Boston. He believed in me when I didn't believe in myself. I wouldn't be a Six Star Finisher if it weren't for him.

And right next to him is Jill's mother Sherry, who recently won her battle with cancer, a fight she waged in Boston itself, making Monday's race all the more special for a runner who never saw herself as an athlete growing up.

‘Qualifying for Boston? I never thought I would qualify,' she admits.

‘My first marathon finish was 5:45. I'm 4'10" and not a naturally fast runner. I also wasn't an athlete growing up, so qualifying was a big deal for me. I didn't anticipate it would happen this soon!'

Jill, from Annapolis in Maryland, earned her BQ at the Steamtown Marathon when she ran 3:36.

Her Six Star journey began in Chicago in 2011 before ticking off London, Berlin and New York City in consecutive years. In 2015 she resumed her mission with the 2016 Tokyo Marathon and will take that final step across that famous blue and yellow stripe on Boylston Street on Monday.

But despite the incredible feat of joining the Six Star Finisher family, it's just one of the reasons the 36-year-old laces up her shoes.

‘I run because I can. Running is a gift, and not one everyone can do it. My passion is running with the disabled. I run with an organization called Athletes Serving Athletes.

‘We push individuals living with disabilities in wheelchair joggers for races. I recently pushed my friend Corey in the Disney Marathon. She became a marathoner! She, and all our ASA athletes, are the reason I run.'

It is certain to be an emotional moment when Jill crosses that finish line on Monday, and it will be a celebration with the family and friends who have supported her every step of the way.

‘I am celebrating not only me finishing the Boston Marathon, but that my mother's battle with cancer has come to an end. For the past year I've been flying up to be with her. I am celebrating her life and her win over cancer.

‘This has been a long road, but totally worth it!'