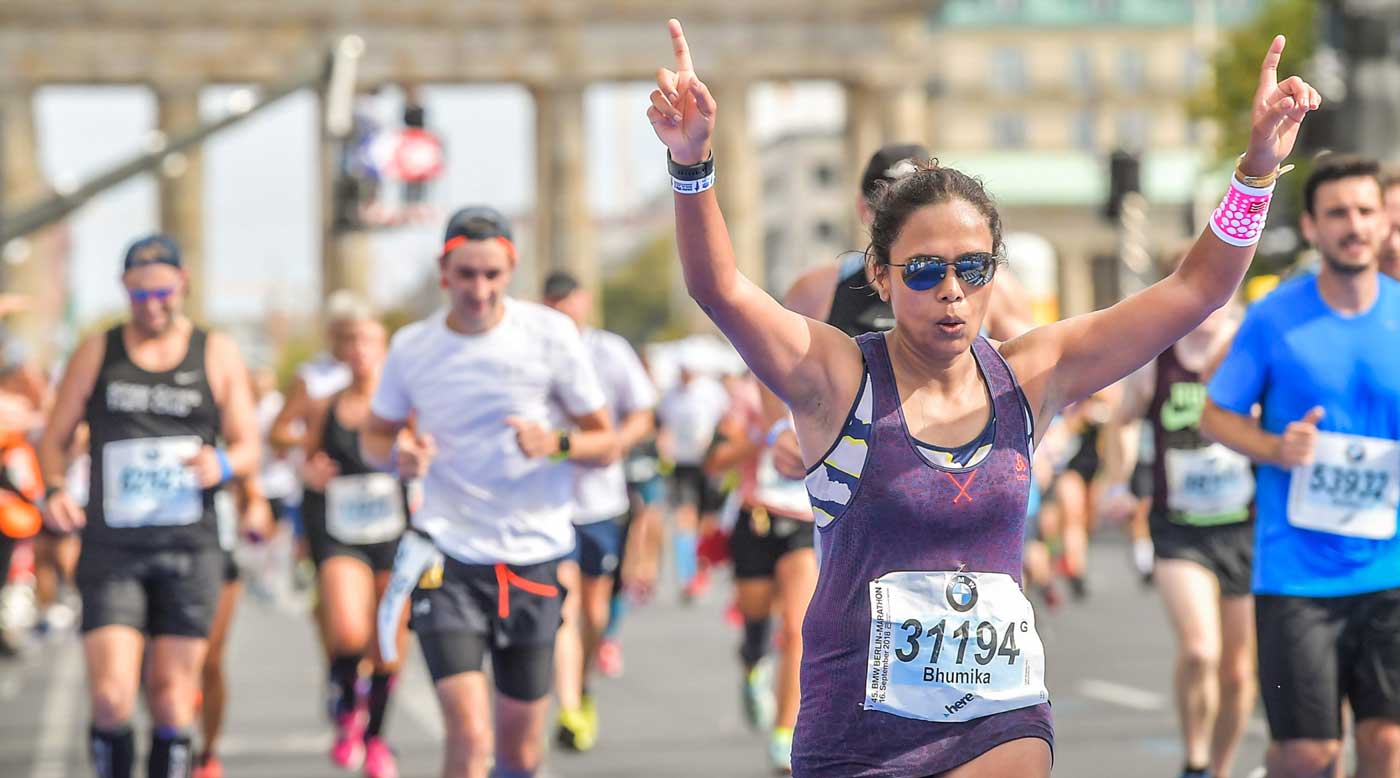 There are currently 41 known Six Star Finishers in India.

When Bhumika Patel crosses the finish line of the 2019 TCS New York City Marathon in Central Park this November, her entry to the Six Star Finisher Hall of Fame will carry far more significance than the simple addition of one more to that total.

This is a woman who can arguably be credited with sparking a revolution in women's running in her homeland. If that sounds fanciful, consider that in 2017 Women's Running magazine in the United States published a list of 21 women who were changing the world through running.

There was Patel alongside them -- the only Asian on the list.

And yet, she only came to AbbottWMM's attention on a sweltering night in the New York Road Runners Run Center in Manhattan in June, when she was drawn at random as one of six winners of a place in this year's race.

No Six Star Finisher can be described as ordinary. But what soon became apparent was that in every sense, this was an extraordinary runner we had plucked from the draw to complete her Six Star journey.

‚"Back in 2009 I was not into running and not at all into fitness," she explains. ‚"Then we had some family issues with my dad [who died of a heart problem] and my mum [who was battling breast cancer]. I realised if I had gotten into a fitness regime earlier, maybe I could have done something."

For a release from such stresses, Patel's husband insisted she joined his work run club.

‚"He trained with fellow employees and their family members at weekends. I went along but I just watched. I wasn't very confident wearing a running outfit and at that time there were not many women running -- just a lot of men.

Eventually, cajouled by one of the coaches, she joined in. ‚"'You have to get up and do some', he told me."

And encouraged by her husband to sign up to the company's upcoming 4km race, she did so reluctantly. ‚"I was worried I wouldn't finish, but at halfway, I realised I was in second place and I knew if I pushed a little bit harder I would win."

That's exactly what she did, and the running bug had bitten. ‚"I won, and on that podium, at the age of 35, I realised there was some potential I had been bottling up. I didn't know these new things would open up for me but after that there was no stopping me."

Top three finishes in a clutch of half marathons followed, and in 2012 she represented India at the Asia Masters Athletic Meet in Taiwan, over the 5k and 1500m, and again in Brazil at the 2013
World Master Athletics championships.

In the same year, Patel became involved with the Pinkathon when it took place in her home city ofg Bengaluru -- a women only event supporting women with breast cancer -- a cause important to her following her mother's successful fight against the disease.

‚"I could see things happening in society -- not just the stigma around talking about ‘that' body part but also the impact suffering from the disease can have on the marriage of your daughters, to the extent that people would hide that they have cancer.

‚"I could relate not just to these issues but to the struggle women had to get running, from wearing the right clothes to finding the time. I realised if we came together and shared what we are doing we could help each other."

And so from ambassador for the Pinakthon, Patel quickly became the central figure in a community of women hungry to learn how to run, how to improve and how to use running as a way to empower themselves.

‚"I realised they needed continuity," she says. ‚"These women also needed hand holding in terms of how to make it a lifestyle, they didn't know how. They are not just struggling with running -- they might be struggling with body weight, time management - so many things. We continued and it's expanded so much."

She is now connected with thousands of women across India now, organizing training runs in her home city but also arrangingsessions and schedules online to help them stay on track.

And the work does not end there. Something else that struck her about her first Pinkathon experience was the large number of visually impaired participants. In 2014, she started training some of them, and in 2016, across Bengaluru, Mumbai and Pune she started conducting separate Guide runners' training sessions on guiding techniques.

‚"I have been volunteering my services as Head Coach for Samarthanam Trust for the disabled for the last four years," she says. ‚"In that time more than 200 visually impaired runners have undergone training for half, full and ultra marathons under me, with the help of more than 100 guide runners."

Three of the VI runners under her tutelage in fact set three new Indian records within a span of four months, a feat that saw Patel recommended for an honorary Doctorate, while the World Record University has approved the thesis for her work in the area of Visually Impaired Ultra Marathons.

In November, however, the focus will be on her own personal accomplishment, and the completion of a journey that began when she sheepishly toed that 4km start line ten years ago.

‚"When I went to London in 2015 I went to the AbbottWMM booth at the Expo and read everything about the Six Star medal and the World Marathon Majors, and from then it was the plan to do all of them."

Berlin was also completed in 2015 before Chicago in 2016, Tokyo in 2018 and Boston this year, where Patel was the first Indian to be invited and to officially run as a sighted guide to a visually impaired runner in the event.

‚"New York is one of the most exciting races and I have really wanted to be there for years but I didn't get through the lottery, so when my name was announced as a competition winner it was like a miracle! I was stunned."

‚"It means a lot because people look at me as a role model. So many of these women keep faith in me and I want to show them it's not impossible to achieve. They are all dreaming about it and I think it means a lot to the running community in India."

No doubt, they will all be cheering her on on November 3.