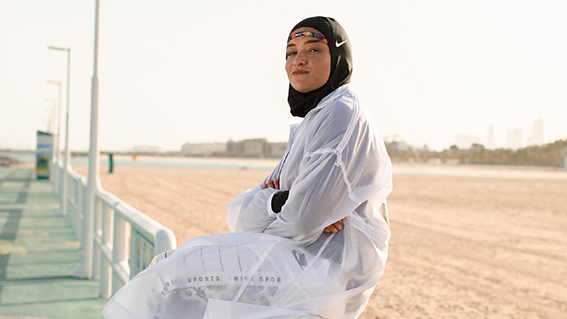 Manal Rostom is a runner.

Manal Rostom is a female runner.

Manal Rostom is a female runner who is leading the way for Egyptians to follow in her footsteps.

A former pharmacist, Manal now resides in Dubai and lives and breathes running and healthy living  –  working as a fitness instructor, public speaker, health and wellness influencer, personal trainer and Nike Running Ambassador. This single lady is passionate, driven and committed to being a positive role model in any way she can.

At the age of 40, she refers to herself as a ‘third culture kid' having attended an international British school in Kuwait as a child and this was where her love for running began.

She explains, "I loved track and field from the age of 13. I was on the school team in Kuwait and was captain for my sports team throughout school. Nothing beats the roar of the stadium when you cross the finish line."

After school Manal went to university in Egypt and joined the sports team and just kept running.

"My parents have always been very supportive of my running, especially my dad. My uncle was a keen long-distance runner so it's always been in the family. But it wasn't easy being the only girl running around the streets back in the 90s in Egypt," she explains.

"I started to wear the hijab at the age of 21 and I remember my dad warning me about not being able to play sports as it would look messy and sloppy, so I did everything I could to maintain an image of that cool, hijab-wearing girl who loves to run.

"I reached a breaking point in 2014 when I came very close to removing it but instead I created a closed, women's only Facebook community called ‘Surviving Hijab' to share my experience and motivate others in the same situation. The group now has more than 680,000 women from around the world."

It was this community that gave Manal the confidence to reach out to Nike and question them on why there was a lack of Muslim and Hijabi women being featured in their campaigns. Nike were quick to respond and she became the first ever Hijabi Nike Ambassador to be featured in a Nike running campaign in the Middle East in 2015.

Momentum continued and Nike went onto create the Nike Pro Hijab with Manal becoming the face of the official campaign when it was released on International Women's Day in 2017.

"I continued my work with Nike and I am the first Arab to be featured on the Nike Run Club app with three Audio Guided runs. My most well-known appearance was in their latest Dream Crazier campaign where myself and my Surviving Hijab community were featured."

There are constant hurdles and obstacles to any runner  –  some bigger than others  –  but Manal has learned to push through them all.

"You get up, dress up and show up", she commands. "It has been a challenge to shut down naysayers and just focus on my goal and training. I could have stopped years ago but I am so glad I didn't.

She continued, "The running scene has changed massively over the years in Egypt. It's no longer the case. A lot of running clubs now exist and have helped move things forward. The availability of appropriate hijab-gear used to be a barrier but things are changing.

"It's such an honor to be paving the way for other Arab and Hijabi girls and I hope I can live up to this role. I take it very seriously and know it is a huge responsibility."

The challenge of changing the opportunities for other runners is not her only goal. Manal is just one star away from completing her Abbott World Marathon Majors Six Star journey and has her sights set on claiming that medal at the 2020 Tokyo Marathon.

"I will hopefully become the first Egyptian to complete all six Majors next March and it will be a massive accomplishment for me and my people", she said.

To date, Manal has completed 12 marathons and one ultra and only started her Six Star journey in 2017 at the TCS New York City Marathon and "wasn't aware of the challenge until I started following Rahaf Khatib's Six Star journey."

She ticked off Berlin and Chicago in 2018, Boston and London in 2019 and her final star awaits her in just a few months' time.

"London has probably been my favorite, and also my fastest Major so far (4:32). I normally cry during marathons because I am in pain but London had the best crowds and I was brought to tears by the pure emotion of running in one of my favorite cities in the world. Maybe because I went to a British school growing up that gave me a stronger connection, but whatever it was, I loved it and would definitely run it again."

Asked how she feels about realizing this dream in Tokyo she explains, "It still feels surreal that this journey of two years and four months will come to an end. I cry every time I picture myself at the finish line of my last World Marathon Major. It has been a dream for a long time and I have worked as hard as I can to make it happen."

Manal Rostom is a runner, a health and fitness ambassador for women and an inspiration to Egyptians all over the world. She shows no sign of giving up on any of those roles and continues to encourage us all to ‘get up, dress up and show up'.