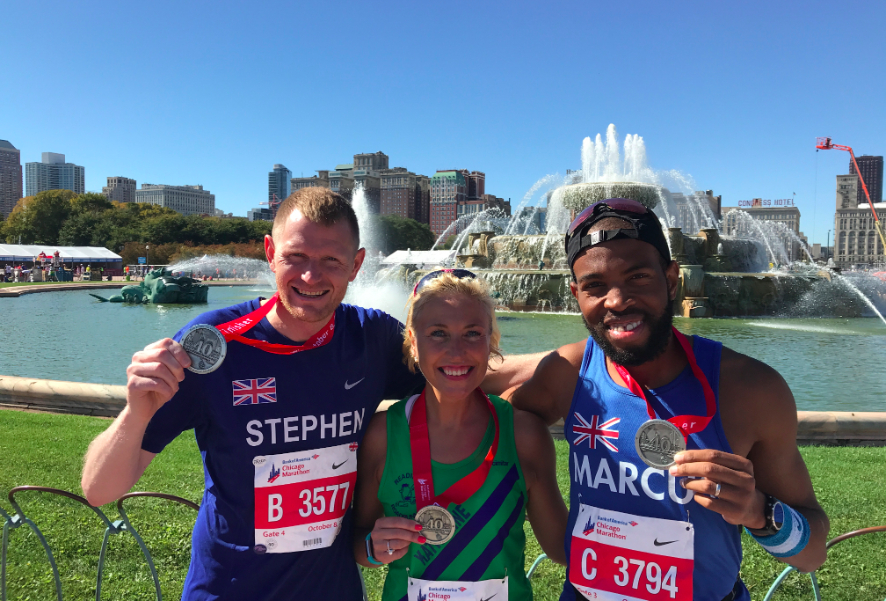 Lewis limbers up for six-star celebrations

When Stephen Lewis completes the Boston Marathon on Monday it will mark the culmination of a nine-year journey back from a broken leg that seemed to have ended his sporting ambitions.

In February of 2009, the 42-year-old from Dover, England, suffered a horrific injury on the football field that brought his playing days to end and made the prospect of running a marathon little more than fantasy.

I had my right leg snapped in half playing football,' he says. 'After surgery and a six-month lay off I was told I would never play football again. Eighteen months after the injury I needed to do something.'

It was then that Stephen decided to enter a half marathon in London, an experience which not only confirmed his leg was strong enough for running, but that also lit the spark under his marathon dreams. The running bug had bitten.

'It is an addiction! When people ask me why I run my answer is simple: for that 15-to 20-second buzz you get when you cross that finish line. You cannot beat that feeling.'

Having fallen in love with the sport, Stephen began his marathon career in 2014 with the Brighton Marathon in the UK, an experience he describes as horrific.

'I muttered the immortal words 'never again', then an hour later, 'never again unless it's London or New York.' A week later I signed up to run New York.'

It was in the Big Apple for the TCS New York City Marathon in 2015 that Stephen began to meet other runners and learn more about the Abbott World Marathon Majors.

'I decided that I was going to complete that journey (to run all six)', he says.

The Virgin Money London Marathon and BMW Berlin Marathon followed in 2016 before Stephen completed Tokyo in 2017. But it was in Chicago in 2017 where the wheels nearly came off.

'A week before I experienced some pain in my left leg,' he recalls. 'I'd done everything in the week leading up to the Bank of America Chicago Marathon to try and make it better, but I was starting to consider pulling out of the race.

'I traveled to Chicago and was pretty down. My aim was simple: get round, run walk or crawl to the finish line. Running the 5km race on the Saturday before the event was a massive boost. I knew it was going to hurt but I needed to know how much for the marathon.

'I got round and I felt more confident that I would complete the marathon. So Race Day arrived and I got through it with pain-killers, kinetic tape and heavy strapping.

'It was sheer agony at times but I did it and I was incredibly emotional when I crossed that line, and even more happy with a respectable time of sub 3:30.'

Stephen's quest for his Six Star Medal ends with that 26.2-mile mission from Hopkinton to Boylston Street on 16 April, and it will be completed with some of those friends made along the way.

'Throughout the journey I have been inspired all the time, meeting some amazing people on the way,' he says. 'Michael Dolan, who blames me for him completing all six! And Marcus Brown again another top guy who will finish his journey with me at Boston along with Katherine Sargeant, David Sears and Lee Cunliffe (who I met in Tokyo) and Karen Selby.

'It will be amazing to complete with these guys, but the experience is made extra special because my wife Penelope is not only going to be there to celebrate this with me but is also running the Boston Marathon.

'She has been there with me through the journey. She has supported me, put up with the tired and exhausted me after those long hours pounding the streets and lived with that stubbornness and sheer determination.

'However I choose to celebrate I will be walking around wearing my Six Star Medal with pride! I am not a big drinker but may well treat myself to the odd beer or two!'

And there will also be a trip to the tattoo parlour for Stephen. 'Finally, I will be getting my sixth star filled in on my marathon tattoo on my leg to signify the six Abbott World Marathon Majors completed!'