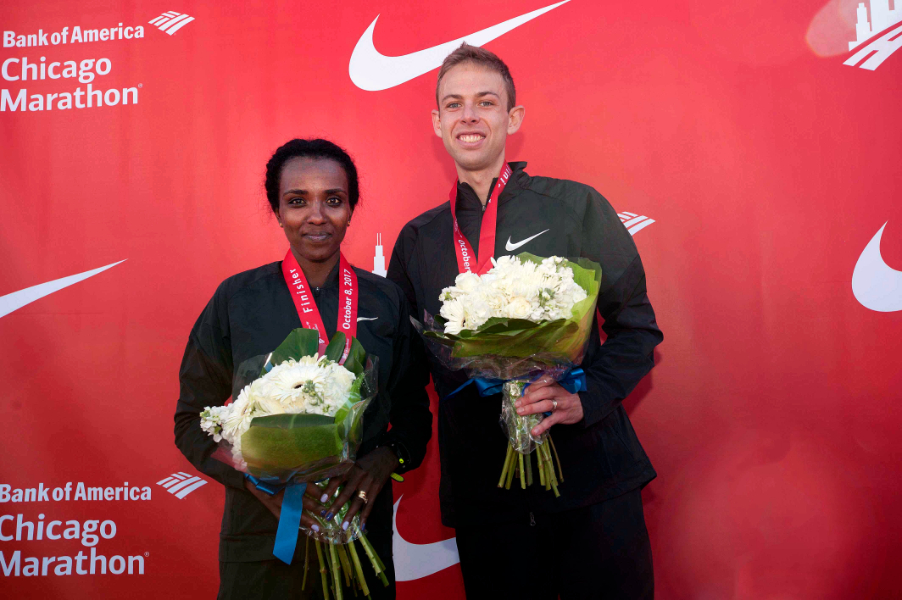 Rupp and Dibaba dominate in Chicago with first Majors victories

The ever-comfortable Rupp cruised away from defending champion Abel Kirui in the last 5km of a slowish men's race to win in 2:09:20, a personal best for the Olympic bronze medallist in his fourth marathon, while Dibaba dominated from 30km after an opening half of 68:48 and finished in 2:18:39, less than a minute outside the PB she set in London this April.

Rupp's win moves him into joint first on the Majors leaderboard on 25 points, level with Geoffrey Kirui, Daniel Wanjiru and Eliud Kipchoge, while Dibaba takes an outright lead in the women's standings on 41.

For Rupp it was a day to remember in the city where his father grew up as he became the first American men's victor on the course since Khalid Khannouchi took the honors 15 years ago.

A huge leading pack dawdled through half way in 65:49 before Kirui broke them up at 30km, causing world record holder Dennis Kimetto and former New York champion Stanley Biwott to drop out.

But Rupp looked at ease throughout and the former Olympic 10,000m silver medallist made his move soon after 35km with mile splits of 4:30 and 4:31 during a second half of 63:31.

Kirui may have lost his title, but the former world champion looked delighted to place second just 28 seconds behind the champion, while fellow Kenyan Bernard Kipyego was third in 2:10:23.

Kirui now lies fourth in the standings on 20 points, while Kipyego joins the leaderboard on nine.

Six months ago in London, Dibaba was left to chase the surging world record-breaker, Mary Keitany, as she fought off sickness and stomach problems to place second. This time it was the Ethiopian who broke up the pack just before half way, dragging Brigid Kosgei clear of defending champion Florence Kiplagat.

For the next 10km Kosgei threatened to spoil Dibaba's party, but the Kenyan lost touch with the triple Olympic champion shortly after 30km as the struggling Kiplagat dropped out.

From then on it was all about Diababa and the Ethiopian track legend went on to claim her first marathon victory in her third race after she had placed third and second in London. She cruised up Columbus Drive and crossed the line with almost two minutes to spare.

Kosgei took more than four and a half minutes from her PB as she hung on to second in 2:20:22, while Jordan Hasay completed a great day for USA as she placed third in 2:20:57. It was a PB by more than two minutes for the Oregon-based runner and the quickest time ever by an American woman on the Chicago course, breaking Joan Benoit's long-standing record.

The defending champions may have faltered in the elite races but they were in unbeatable form in the wheelchair contests as Hug won his second and McFadden her eighth Chicago title.

Hug left it late to assert his dominance over the men's field, pushing ahead in the last 5km of the race to open a one minute lead on a large pack. The �Silver Bullet' crossed the line on Columbus Drive in glorious isolation in 1:29:23 with Australian Kurt Fearnley repeating his runner-up performance from 2016 one second ahead of Spain's Jordi Madera Jimenez.

Hug's second AWMM victory in three weeks means he now has 66 points at the top of the men's leaderboard and is back on track to defend his Majors title. Fearnley joins London Marathon winner David Weir in joint second on 25.

McFadden missed the London Marathon in April after losing to Sch�r in Boston just weeks after surgery for blood clots. But the Series X champion bounced back today as she unleashed her well-known finishing sprint around the final two corners to clinch her seventh successive Chicago victory.

Sch�r had raced at world record pace in an attempt to break the US star but McFadden simply slipstreamed the small leading pack before turning on the afterburners to cross the line in 1:39:15.

Fellow American Amanda McGrory hung on to her training partner to place second in the same time with Sch�r third, two seconds slower.

McFadden's 25 winners' points moves her into third on the leaderboard. Sch�r still tops the table on 59 with McGrory second on 32.