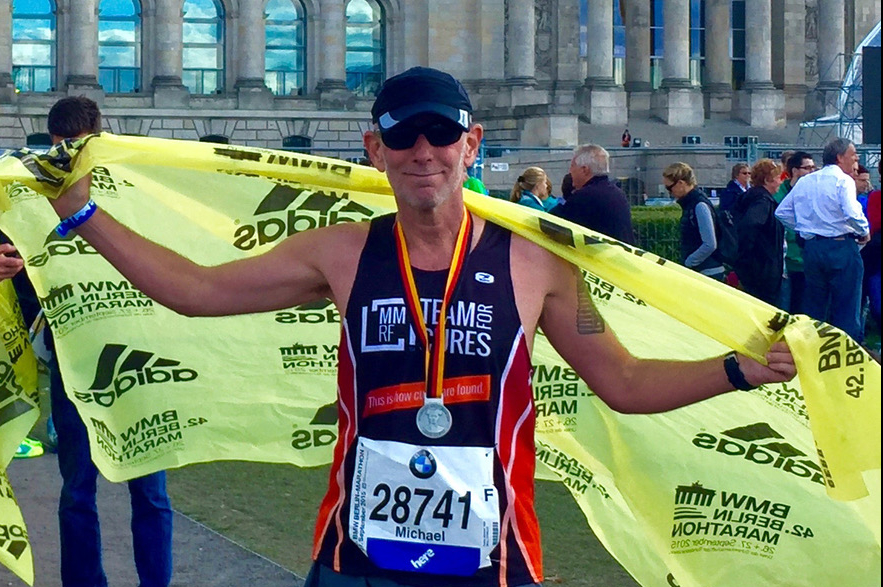 Six at 60 for birthday boy Michael

For Michael Rabin, this year's Boston Marathon will serve up a double reason to celebrate.

Patriots' Day will double as a celebration of his recent 60th birthday, as well as the day he will earn his Six Star Medal.

The race marks a decade-long love affair with running to complete the Abbott World Marathon Majors for the psychologist from Manhattan's Upper West Side, and a five-year campaign to earn this medal, having taken five attempts at earning his qualifying time for the world's oldest 26.2-mile race.

‘Running represents perseverance in the face of challenge,' he explains. ‘It is a great metaphor for life. The Abbott World Marathon Majors are the ultimate symbol of running and what it represents.'

‘For me, targeting this goal was emblematic of the life-affirming benefits of running.'

Michael has used his running to manage and counter heart disease. ‘So far, successfully,' he smiles.

When he ran his first marathon at the age of 50 in 2008, there was not a hint at what was to come for Michael, both on and off the road. ‘I saw it as a one-time adventure to cross off the list,' he says.

‘I met my goal of running the whole course and crossing the finish line in one piece. Though I broke no records, I was pleased with the outcome.'

A few months later he went for a routine annual physical exam, expecting nothing significant given the feat he had just accomplished.

‘My doctor ran an EKG and noted that it had changed a bit from the previous year's. With no cardiac symptoms, she said it was probably nothing, but would feel more comfortable if I ran it by a cardiologist.'

Within days, Michael was fast-tracked into hospital.

‘The next day the surgeon discovered significant coronary blockage and inserted four stents. He said, ‘You were the guy who was going to go out running one day, drop dead, and no one would understand why.''

After digesting it all, and with the doctor's blessing, Michael resolved to run the next New York City marathon ‘for two reasons', he says. One: to test the new plumbing and, two: as an act of defiance and affirmation.'

The hardware worked well and he shaved one hour and 14 minutes off his previous year's time.

‘Since then I've run 21 more marathons. Each marathon represents a celebration of life for me. In fact, every time I run any distance I end it with an appreciation for all of life's moments and a special appreciation for my native New York Road Runners' motto ‘'Run for Life.''

A mission that began with the New York City Marathon in 2008 saw Michael tick off Chicago in 2013. ‘After Chicago I set the goal of running all six majors!' he says.

Tokyo followed in 2014 with London and Berlin completed in 2015. All that stands in between the 59-year-old and his Six Star Medal is that famous 26.2-mile stretch of blacktop from Hopkinton to Boylston Street on 16 April, but in the build up to that special day, he has also discovered a happy coincidence.

‘It turns out that my four stents are made by Abbott.I had no idea before I looked up my medical information. It sent tingles down my back to learn this!'

When he crosses the finish line in Boston, his children and fiancee will be cheering him home. ‘We will celebrate my birthday and this achievement together with a special dinner on marathon night. It's been quite a decade!

And he has no plans to hang his running shoes up just yet.