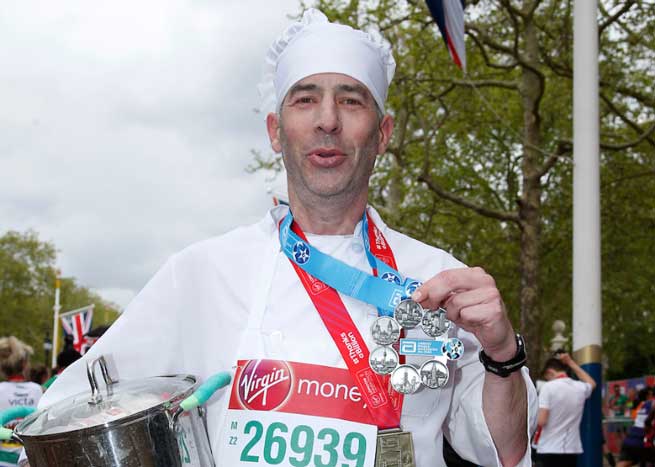 Six stars and a stock pot!

Becoming a Six Star finisher is a considerable feat. But for one runner who joined the growing club at the 2019 Virgin Money London Marathon, it was not enough.

Jared Levine from Northern Virginia in the United States decided to set himself an additional challenge as he tackled the 26.2 miles from Greenwich to The Mall in April to collect his hard-earned silverware.

The 47-year-old took aim at the fastest marathon time by a male dressed as a chef -- whites, hat, stock pot and all.

AbbottWMM.com caught up with him to find out how it went.

Where did your Majors journey begin?

I grew up in New York and watched the marathon every year. A few of us were talking about the marathon and thinking ‘we could walk that'. We did the math and realized if we wanted to do it we'd be walking for eight hours. None of us wanted to do that, so we decided to start running to chop that time down to something more reasonable. There were three of us. One got in through the lottery the next year and I got in the following year. I ran the race in 2003 and 2004.

And 15 years later, you became a Six Star Finisher.

After 2004 I didn't run for years. I ran a little bit for fitness but nothing as far as looking to do another marathon. Then in 2011 I went on vacation to Disney with my friends and their kids, and found out about the Disney Marathon weekend. I signed up for what was then the Goofy challenge the next year -- a half marathon and full marathon on consecutive days. I loved it and decided while training that I also wanted to do the Marine Corps Marathon the same year in 2012 and have been doing more and more since then.

When did you run your next AbbottWMM?

As I got better, I was dropping my times and realized I might be able to qualify to run Boston. I eventually BQ'd in Baltimore in 2015, and my time also qualified me for Chicago. So, I ran Chicago in 2016, then Boston in 2017 and thought: ‚"I have half of these done, it's time to head overseas."

When did you run the other two Majors before London?

I've actually done the other three in the space of eight months. I ran Berlin in September 2018 then Tokyo and London this year. Tokyo for me was more challenging than Boston 2018, which was worse weather, but for some reason my leg locked up around mile 22 in Tokyo, so I had to walk, and I was freezing my butt off the entire time.

Then it was time to train with the stock pot! How did the idea come about?

Someone had posted in one of the Facebook groups I'm in about the connection between Guinness World Records and London. I looked for something sane and doable. Some I'd have loved to do were way too fast for me. I wanted to do a movie character or TV character but neither were realistic for me in terms of speed. I whittled it down and landed on the chef.

When did you realize it meant running with that huge pot?

It wasn't until after I applied and was accepted that I realized it would require a stock pot. I had seen a photo of the person who had most recently broken the record a couple of years ago but didn't know from that photo that the pot he was holding was actually a requirement!

How do you even train for that?

I started running withan 8lb dumbbell -- a little bit over what I needed in terms of weight, and it seemed OK. I eventually got the pot I'd be using and thankfully I was able to fit on the treadmill and run with the pot on my side without banging it against the bar of the treadmill. The longest run I had left at that point was a 10-mile run. I stayed on pace for that but didn't know how draining it was going to be across the rest of the 16 miles. I had no way of predicting just how much it would tire me.

And how did it go on race day?

It drained enough out of me that I missed the time by 20 minutes. The crowd was fabulous though. There's little better than having the crowd clearly cheering for you. Throughout entire race wherever there were people I was hearing Go Chef! It's a great boost. The thing that was actually propelling me was the possibility of not just finishing London and the Six Star medal -- which is huge -- but the possibility of having it coincide at the same time as a world record -- how many people get to say they've finished their Six Star journey in London with a world record?

So, the world record wasn't to be, but you're having another go?

Yes! I've applied for another attempt! Not as a chef, that stock pot was too brutal. I'm running the Scotiabank Toronto Marathon in October as a Supervillain in a Riddler costume. It's an unset record, so as long as I break four hours and no one else is doing it at the same time I'll set it.

What would you say to someone starting out on their own Six Star journey?

Do everything you can to enjoy the ride. Every now and then it is a grind, but if you're not enjoying it it's not going to be worth it. Do what you can to improve your time as much as possible. My last three Majors were all run with charity bibs, but being able to qualify for a marathon based on time -- there's a wonderful feeling of pride behind that. If there's a chance you can do that, strive for it. It's worth the extra effort. My first marathon in NYC was 4:48:49, I was 31, now my PB is just under 3:12 and I have a coach now with the aim of breaking three hours.