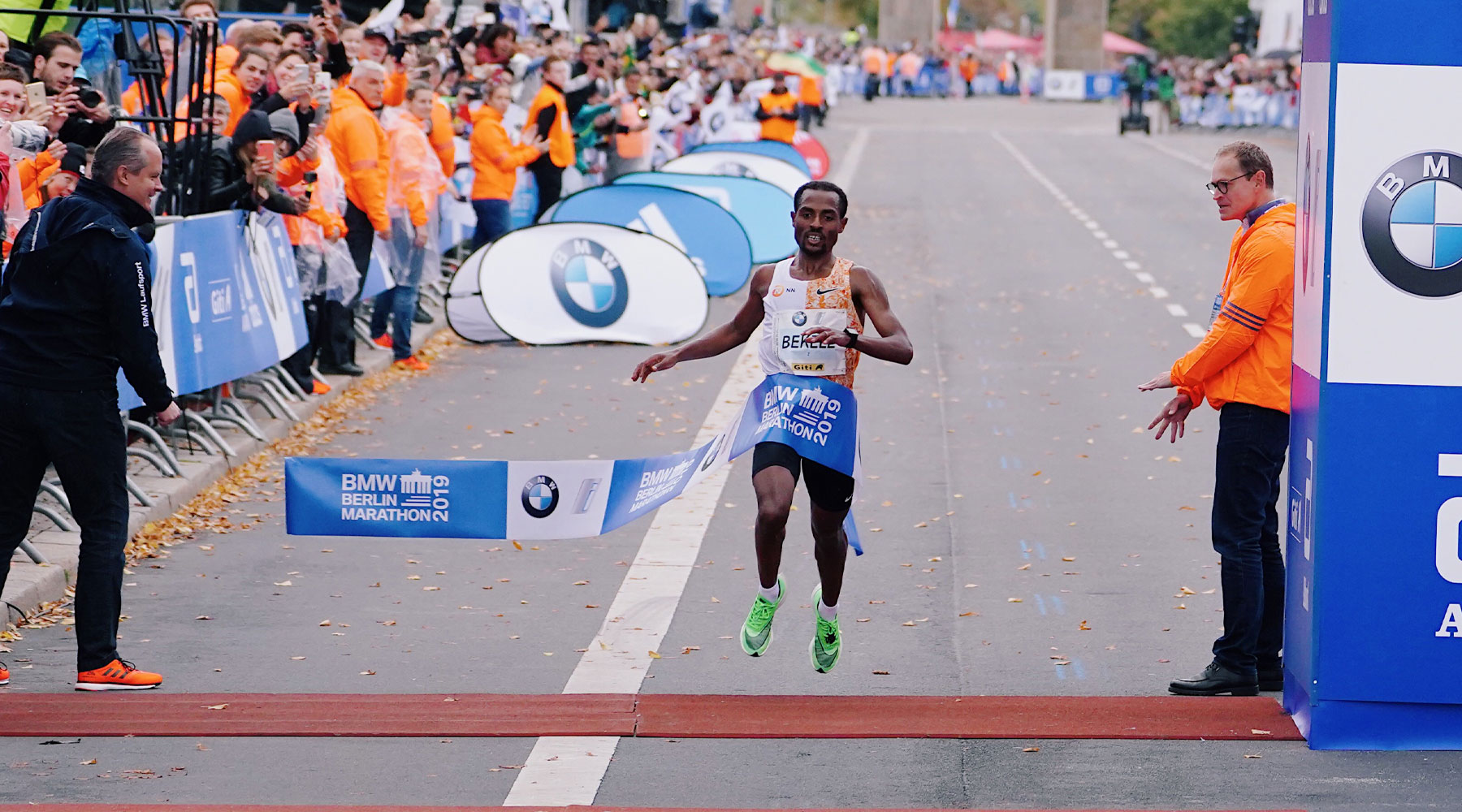 Kenenisa Bekele completed one of sport's most incredible comebacks to win the BMW BERLIN-MARATHON in 2:01:41, just two seconds outside Eliud Kipchoge's world record.

When the Kenyan recorded his 2:01:39 on the same course 12 months ago, it was thought he had pushed the mark so much lower it could take a generation to come close to it.

Yet the 37-year-old Ethiopian, who has suffered with a string of injury set-backs since winning here in 2016, rolled back the years to produce the second greatest marathon run of all time.

Bekele set a blistering pace alongside Tokyo champion Birhanu Legese and Sissay Lemma, as they clocked 61:05 for the first half, but the veteran began to struggle at the 35km mark and found himself slipping away from that pair around the 30km mark.

It appeared his race was run, and soon Legese was all alone as he dropped Lemma and looked set for his second Series XII win. The sight of Lemma starting to fade gave Bekele all the motivation he needed to grit his teeth and fight his way back into the race.

By 35km he had scorched past Lemma, but still had 13 seconds to make up on Legese. Doubts that age, injury and a seemingly comfortable looking Legese would deny Bekele were quickly wiped out.

He had blown by his compatriot before they reached the Brandenburg Gate and had just his wristwatch left to conquer.

In the end,despitye a second half time of 60:36,he was agonizingly close to Kipchoge's record. But for Bekele, this was about proving that there is life in those old legs yet.

What price a head-to-head between the pair next Spring?

Ashete Bekere held off the challenge of Mare Dibaba to claim the women's crown in Berlin in a new PB of 2:20:14.

Bekere came into the contest off the back of a victory in the 2019 Rotterdam Marathon and a triumph in Valencia last December,andproved stronger than her well-known rivals to claim her first Abbott World Marathon Majors race win.

The early stanzas of the race featured all the athletes expected to be in the final shake-up, but there was a shock at 30km when defending champion Gladys Cherono pulled up in what looked ot be some distress.

Cherono's withdrawal cleared the way for a new champion to be crowned, but it wasn't until 35km that Bekere and Dibaba were left all alone after Dally Chepyego yielded to the pace they were setting.

The remaining pair went stride for stride through the Brandenburg gate until the 31-year old Bekere finally found the legs to break the much smaller Dibaba.

Negotiating a cluster of male finishers as she approached the tape, Bekere crossed the line in 2:20:14 to announce herself as a contender in future Majors races to come.