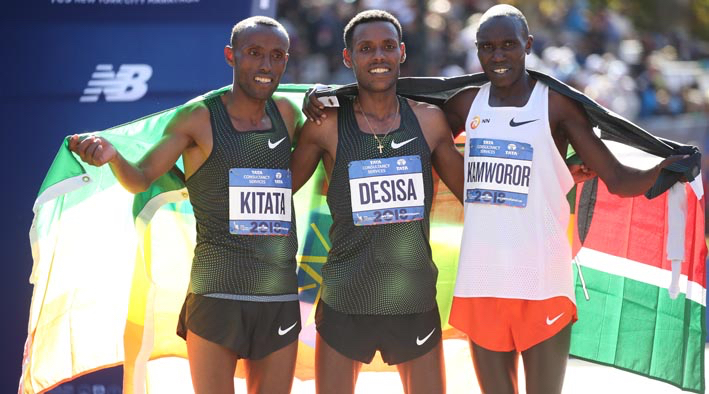 Can Desisa do the double?

Lelisa Desisa will bid to complete a unique Abbott World Marathon Majors autumn double when he sets foot on the start line of the 2019 TCS New York City Marathon.

The Ethiopian claimed the IAAF World Championships marathon crown in Doha in October to take an early lead in Series XIII of the Majors, and is now seeking to retain the New York title he won last November.

Victory in this, officially the third men's race of Series XIII, would see the 29-year-old maximize his points total already, throwing down the gauntlet to the rest of his competitors to try and catch him at the top of the leaderboard. He came second in Series XII after adding second place in Boston to his Big Apple triumph.

Desisa's win last year was hard-earned, out-kicking the gutsy Shura Kitata in Central Park to clinch a race that had eluded him on three occasions before 2018. Kitata is back to try and avenge that defeat, as is Kenya's Geoffrey Kamworor.

The 2017 New York champion faded surprisingly in the final miles of the 2018 edition of the race to settle for third, but has since underlined his credentials with a new half marathon world record of 58:01 in Copenhagen in September this year.

Last year, these three ran the second, third and fourth quickest times the course has ever witnessed in the men's race, teeing up a mouth-watering prospect of another three-way battle.

On the women's side, Mary Keitany returns to hunt a fifth New York win after a scintillating performance last year. The 37-year-old Kenyan destroyed the field with a time of 2:22:48, the second fastest time ever run by a woman on New York's famously tough course. It meant Keitany reclaimed the title she had relinquished to Shalane Flanagan a year earlier.

Flanagan's recent retirement clears the way for a new home-grown darling of the Central Park crowds to emerge and Des Linden will have her eyes on that moniker after her success in Boston in 2018, but the Michigan-based athlete will have her work cut out.

Ethiopia's Ruti Aga is sure to be prominent among the main contenders. After three second places in Majors, Aga broke through with victory at the 2019 Tokyo Marathon. She claimed second place overall in Series XII thanks to her Tokyo win and a second-place-finish in Berlin in 2018 -- in a time that would have set a new course record had Gladys Cherono not run the race of her life to claim that particular mark.

The 25-year-old suffered in the heat of the Doha World Championship marathon and did not finish the distance, so a return to form on the cooler streets of the five boroughs would reaffirm her status as a key contender in Majors races.

A newcomer to watch out for will be Joyciline Jepkosgei. The 26-year-old has stepped up to the marathon distance after making waves at 13.1 miles. She broke four world records in 2017 at the Prague Half Marathon, clocking 30:05, 45:37 and 1:01:25 to break the 10km, 15km and 20km records on her way to a new half marathon world record, and she lowered the mark to 1:04:51 in Valencia later that year.

A silver at the world half marathon championships in Valencia followed in 2018, but a late withdrawal from the Hamburg Marathon earlier this year means we have yet to see what she can do in the marathon discipline.

The unforgiving undulations of New York City may seem a daunting choice on which to make her 26.2-mile bow, but Jepkosgei is not coming in completely blind to the course, having won the United Airlines NYC Half Marathon in March this year.

In the wheelchair divisions, the challenge for both men and women will be to try and break the stranglehold currently exerted on the sport by reigning series champions Manuela Sch√§r for the women and Daniel Romanchuk for the men.

Sch√§r is seeking a ninth consecutive AbbottWMM win in what would be her New York hat-trick, while Romanchuk is out to defend the title he won for the first time in 2018.

Both racers took maximum points from their first outing of Series XIII at the Bank of America Chicago Marathon in October, scooping both the 25 points for victory and the eight extra on offer for Chicago's 400m bonus point sprint.

In New York, the format for the bonus takes the shape of a first past the post contest that will be staged around the halfway mark of the marathon.

For Sch√§r, New York was the scene of her toughest challenge in Series XII as she traded blows with Tatyana McFadden for much of the way until eventually unleashing a break that the American could not contain in the final hills of Central Park. Her usual modus operandi is to leave her rivals way behind long before it comes down to such margins.

Romanchuk left his winning move even later in 2018, outsprinting veteran pair Marcel Hug and David Weir up the last gradient to take the tape. He did no such thing in Chicago a fortnight ago, making his decisive break at halfway.

Whichever way you turn, there are intriguing plots to follow in this weekend's elite races. The city that's home to Broadway's theatrics never disappoints when it comes to marathon dramas.