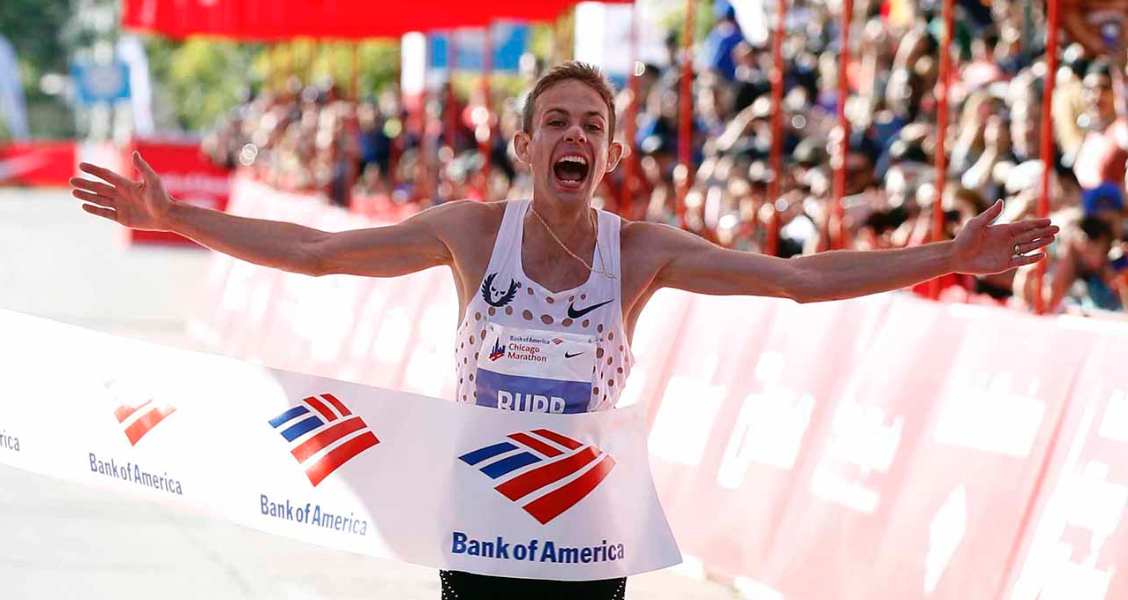 The 41st Bank of America Chicago Marathon pits two old stablemates against each other in a strong men’s field as the second race in the AbbottWMM Series XII looms on Sunday.

The USA’s Galen Rupp defends the crown he won last year against decorated British Olympian Sir Mo Farah. The pair both shot to success under the guidance of the legendary Alberto Salazar, with Farah claiming double gold in both the London and Rio Olympics in the five and 10,000m, while Rupp also collected medals in the 10,000m at both Games.

Rupp was quicker than his old training partner to marathon success when he coasted home in the Windy City last October ahead of Kenya’s Abel Kirui and he has since added the Prague Marathon title to his CV in a PB of 2:06:07.

Farah’s second attempt at the Virgin Money London Marathon in April 2018 ended with an impressive third place on a searing day in his home town, where he also set a new British record of 2:06:21. With pacemakers in play on Sunday and just 14 seconds between their respective fastest times over 26.2 miles, it could be a fascinating battle.

With eyes fixed on the potential duel between these two, it would be foolish to overlook Kenyan namesakes Abel and Geoffrey Kirui. Abel won the 39th renewal of this race before coming second behind Rupp in 2017.

Geoffrey enjoyed a stellar 2017 with victory in Boston and the IAAF World Championships, but the conditions were not his friend in Beantown this year, where his healthy advantage looked like handing him a successful defense, before it was whittled away in the driving rain by Japan’s Yuki Kawauchi.

Kawauchi also features on Sunday, with long odds on another shock being sprung by the man from Saitama. The prospect of a place in his national team for his home Olympics in 2020 will be motivation enough for the likeable 31-year-old. Don’t rule out more heroics.

In the women’s contest, the American presence has been diluted by recent withdrawals of last year’s third place finisher Jordan Hasay and Amy Cragg, who registered a huge new PB along with the final podium spot in Tokyo last February.

Despite those absences, the addition of Kenyan star Florence Kiplagat has sprinkled some extra stardust onto the field. Kiplagat took home the 2015 and 2016 titles from Chicago but withdrew at 25km last year. She faces the growing threat of countrywoman Bridgid Kosgei, second here last year and second again in London at the finale of Series XI.

The 24-year-old has only finished outside the top two just once in eight marathon outings and is surely due to take down a Major soon.

Birhane Dibaba will also be keen to add to the title she won in Tokyo last February. No stranger to Chicago’s podium, she will be aiming to improve on two previous third place finishes.

Home soil supporters will be keen to see how triathlon superstar Gwen Jorgensen fares as she makes only her second showing in the 26.2-mile distance. A credible 14th in New York in 2016 just months after taking Olympic gold in the swim-bike-run event in Rio suggested that full concentration on the marathon could yield success. With Shalane Flanagan and Desiree Linden both pulling off wins in American AbbottWMM races in Series XI, there is an outside chance we could see that list grow come Sunday.

In the women’s wheelchair division, Tatyana McFadden is aiming for a sixth straight win in Chicago after a rough start to her Series XII campaign in Berlin following a mishap in training with her chair. McFadden will need a similar outcome to her recent Chicago performances in order to begin chipping away at the lead already established by reigning Series champion Manuela Schär.

In Berlin, the Swiss bagged the 25 points for the win as well as the eight on offer in the new bonus points competition to kick-off her defense in perfect fashion. They will both be on watch for Australian tyro Madison de Rozario who powered to victory at the 2018 Virgin Money London Marathon to claim her maiden AbbottWMM win.

Early men’s wheelchair series leader Brent Lakatos will not feature on Sunday, so the way is clear for the likes of champion Marcel Hug and his long-time rival David Weir to fight for the honors.

Weir’s decision to hit the road this series could see a titanic struggle between the two over the coming months, but they will both be aware of the threat posed by University of Illinois teenage prodigy Daniel Romanchuk, who placed fifth in Berlin and is accruing racing smarts with every contest he gets under his belt.

To follow the race live from anywhere in the world on Sunday, log on to NBC Chicago for a live stream.