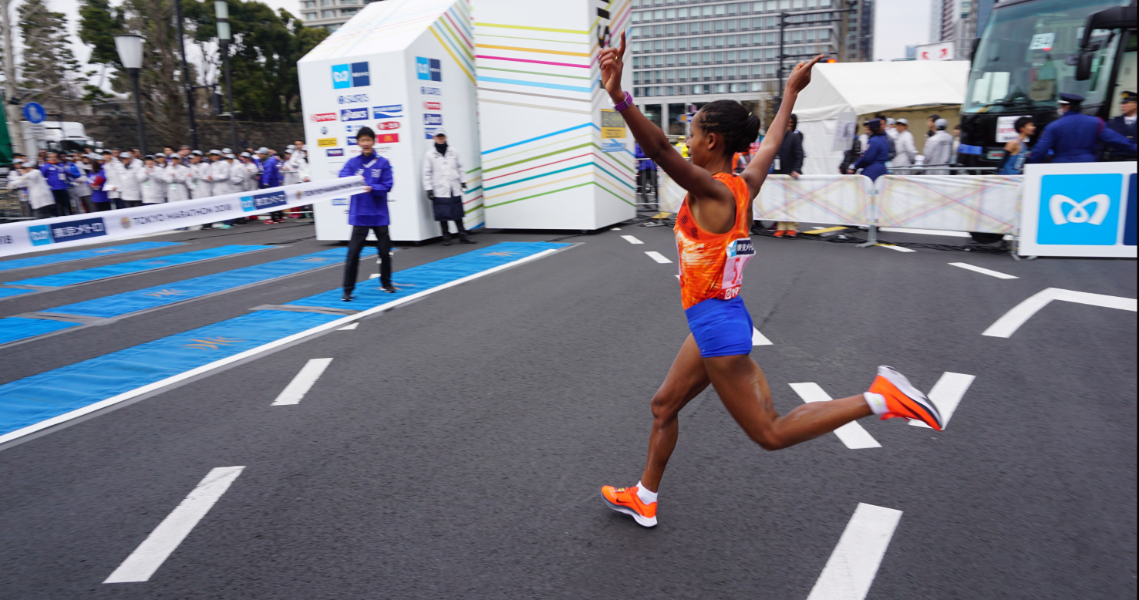 History was made at the Tokyo Marathon on Sunday, 25 February, when Dickson Chumba and Berhane Dibaba became the first runners ever to win a second title at Asia's only Abbott World Marathon Majors race.

Chumba romped home to reclaim the men's crown he won in the Japanese capital four years ago after pre-race favourite Wilson Kipsang had dropped out early in the race, while Dibaba proved too strong for fellow Ethiopian Ruti Aga in the closing stages and crossed the line just four seconds outside the women's course record.

Dibaba took more than 90 seconds from her personal best as she repeated her 2015 Tokyo victory, clocking 2:19:51 to join the select sub-2:20 club for the first time and move into the top 25 on the world all-time list.

She also leaps to joint fourth in the women's Series XI standings with 25 points, 16 behind leaders Mary Keitany and Tirunesh Dibaba, while Chumba joins five other men at the crowded summit of the men's leaderboard, all on 25 apiece with just two races left.

Meanwhile, Manuela Sch�r sealed the women's Series XI title with her fourth win from five races and Hiroyuki Yamamoto gave the Japanese fans much to cheer as he sprung a shock to win the men's wheelchair crown for a fourth time ahead of countryman Tomoki Suzuki.

Kipsang had cruised to the men's course record 12 months ago and was all set for a world record assault on Tokyo's fast new course, but it proved to be a bad day for the former Majors champion who fell behind early in the race and dropped out before the leaders reached 17km.

Chumba made the most of his opportunity, taking a group of six past 30km in 1:20:20 before breaking clear of Kenyan compatriots Amos Kipruto and Gideon Kipketer after 35km. The 31-year-old had finished third in Tokyo for three years in a row and with the favourite gone he wasn't going to let this one slip. He swiftly built an unassailable lead before finishing in 2:05:30.

The real drama was happening behind him, however, as Japan's Yuta Shitara produced a late surge to blaze past Kipruto, Kipketer and Olympic silver medallist Feyisa Lelisa in the final 5km. The largely unknown 26-year-old, who was 11th last year, delighted the home fans as he stole second place in a Japanese record of 2:06:11, taking nearly three minutes from his previous best.

Kipruto hung on the place third in 2:06:33 ahead of Kipketer with Hiroto Inoue bringing more Japanese joy as he ran 2:06:54 for fifth.

Dibaba took the women's win with a devastating move late in the race after she and Aga had moved away from Shure Demise and USA's Amy Cragg in the second half. The Ethiopian pair were locked together at 35km before Dibaba unleashed a finishing burst that left Aga struggling alone in second.

She crossed the line in 2:21:19 with Cragg taking a triumphant third place in 2:21:42, an incredible five minutes faster than her previous best, making her the fifth quickest American woman of all-time.

After finishing third at the IAAF World Championships last April, Cragg added another nine points to her Majors tally to move into ninth spot while Aga now lies third on 32 points behind the joint leaders.

Demise hung on to fourth to add another four points to her total while Helah Kiprop was the first Kenyan home, picking up a single Majors point in fifth.

Points were up for grabs in the wheelchair races too where Sch�r powered away from Series X champion Tatyana McFadden in the last 5km to win by more than a minute in 1:43:25.

The dominant Swiss now has 109 points at the top of the women's standings, and with McFadden more than 50 behind on 57, has an uncatchable lead over her rivals.

McFadden battled hard to stay with her nemesis but had to settle for second again, as she did in New York, this time clocking 1:44:51.

Tsubasa Kina snatched another podium place for Japan finishing third in 1:46:17 ahead of last year's winner Amanda McGrory, who was fourth in 1:48:01. Fellow American Susannah Scaroni was some way back in fifth.

Yamamoto and Suzuki blew the men's race apart with a bold break before the 15km mark that stretched to more than five minutes by the finish. Yamamoto almost tipped out of his chair as he flew round the final corner on one wheel. He hung on to grab first by a second in 1:26:23 and complete his fourth Tokyo win, adding to previous victories in 2010, 2012 and 2014.

Hug still holds a commanding lead at the top of the men's standings with 91 points while Fearnley moves clear in second ahead of Yamamoto, who is now joint third alongside Britain's David Weir.

Series XI of the Abbott World Marathon Majors resumes at the Boston Marathon on 16 April and concludes in London on 22 April.