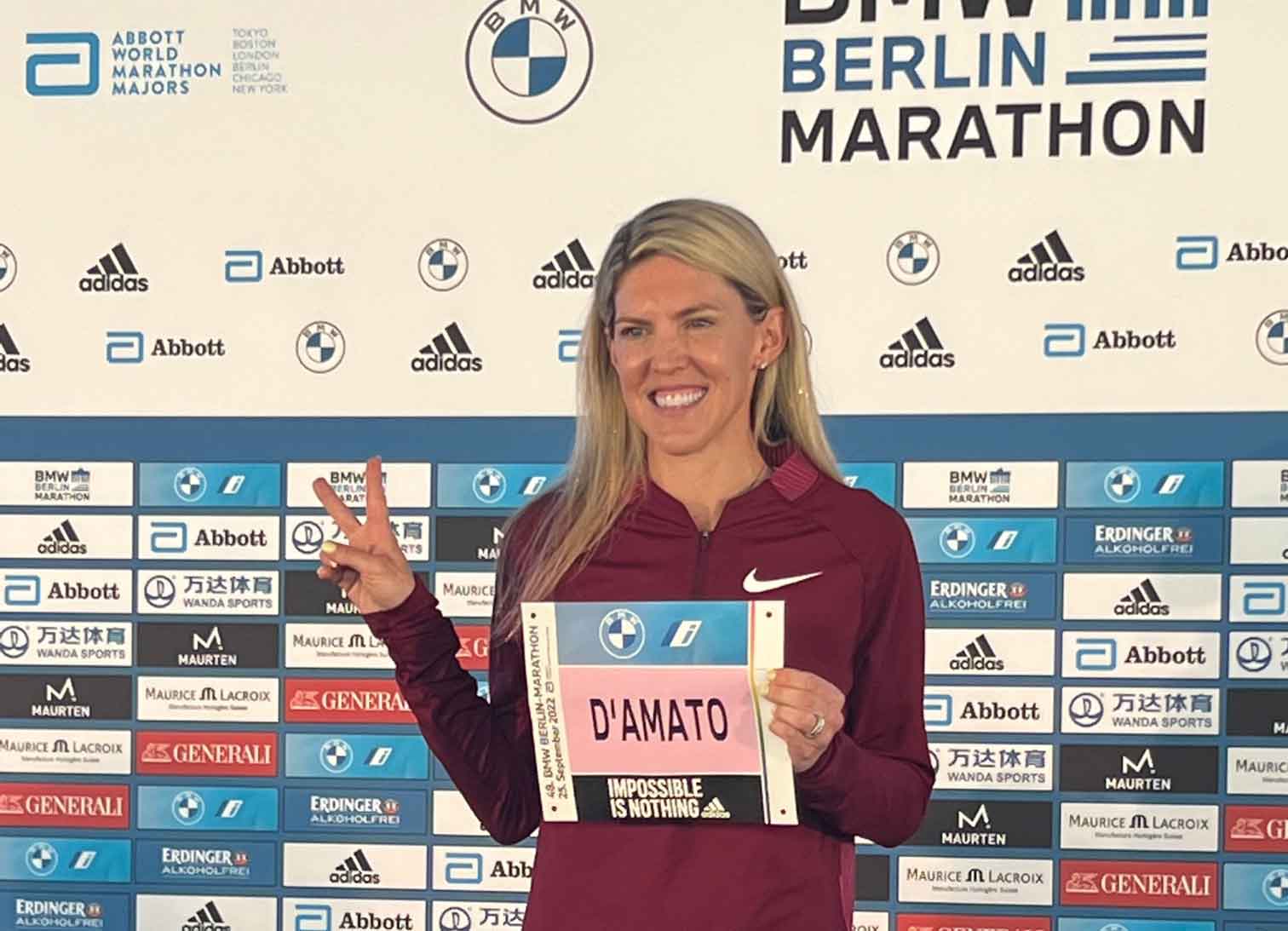 D'Amato dares to dream in Berlin

A quick study of the history of the BMW BERLIN-MARATHON is all Keira D’Amato needs to realise she is standing on the cusp of history this weekend.

Never before has an American athlete tasted victory in the German capital.

She claimed that latter title earlier in 2022 when she relieved Deena Kastor of a record the Olympic bronze medallist had owned since 2006. D'Amato clocked 2:19:12 at the Houston Marathon in Texas.

In what could be seen as portentous circumstances, Kastor will also be in Berlin this weekend chasing another piece of career hardware as she seeks to complete her Abbott World Marathon Majors Six Star Journey.

That feat is something D'Amato sees as a signpost for her own running longevity.

"My journey won’t stop with running when I stop improving, I’ll run for the rest of my life. I run because it's fun and I love it." she said.

"I admire Deena, she’s one of my big role models and to watch her pave the way, if I can do that for a long time, it’s really inspirational."

D’Amato’s rise to the top of the US time charts has flown somewhat under the radar.

In 2020, all American eyes were on the gutsy London performance of Sara Hall as she hammered her way through the field for an impressive second place in the eerie quiet of the COVID-hit edition of that race.

Hall was widely tipped as the likeliest pretender to Kastor’s record, but the next name on everyone’s lips was Molly Seidel, who equalled Kastor’s bronze medal run from 2004 when she sealed third place in the delayed Tokyo Olympics of 2021.

Seidel went on to pocket fourth spot in New York in later that year in a new American course record, but 2022 began with a bang in Houston when Hall set a new USA half marathon record, only for D’Amato to follow her a day later by claiming a new 26.2-mile best.

It wasn’t a total surprise. D’Amato had notched a fourth-place finish in Chicago last fall just behind Hall. It was clear D’Amato was in the kind of shape that the right conditions and optimum health would reward. But you still have to deliver, and it had taken the best part of 20 years for any American woman to better Kastor's mark.

D'Amato's training seems to have gone well - she has even had time to pepper her Strava feed with some well-chosen puns – but she is up against five of Ethiopian and Kenyan athletes who have all recorded personal bests under 2:21.

Vibian Chepkirui is also a live contender having won the last two editions of the Vienna Marathon.

The challenge before D'Amato in Berlin is to prove she can carry her early year form into an overseas race, and that she can produce again on the city’s notoriously fast course.

She ran here in 2019 in a time some 14 minutes slower than her new personal best, demonstrating just how much she has improved since picking the sport up again after the birth of her two children. She also operates her own running store in Virginia, where customers can pose with a full scale replica of the Runner's World cover she recently adorned.

As a busy mum, wife, businesswoman and elite level runner, life is anything but quiet, but at present it seems the balancing act between these roles is being well-executed.

She does not have fellow American Hall to urge her on, the 39-year-old having withdrawn through injury some weeks ago, so it’s down to D’Amato to fly the Star Spangled Banner.

Less than a mile from where the same flag flew over Checkpoint Charlie in a city that overflows with historical significance, D’Amato knows it’s within her grasp to see it raised on Sunday if she can make it to the top step of the podium.

She would join Kastor and recent American female AbbottWMM race winners Shalane Flanagan and Desiree Linden in a small but growing club that underlines the improving strength of American women's marathon running.

"It would mean the world to me," said D'Amato. "My agent keeps reminding me, it’s not about how fast you run. With a national record, someone can take that away, but winning or getting on the podium at Berlin, no one will take that away, ever."

Kipchoge rewrites the book in Berlin

Kipchoge back to reclaim Berlin crown