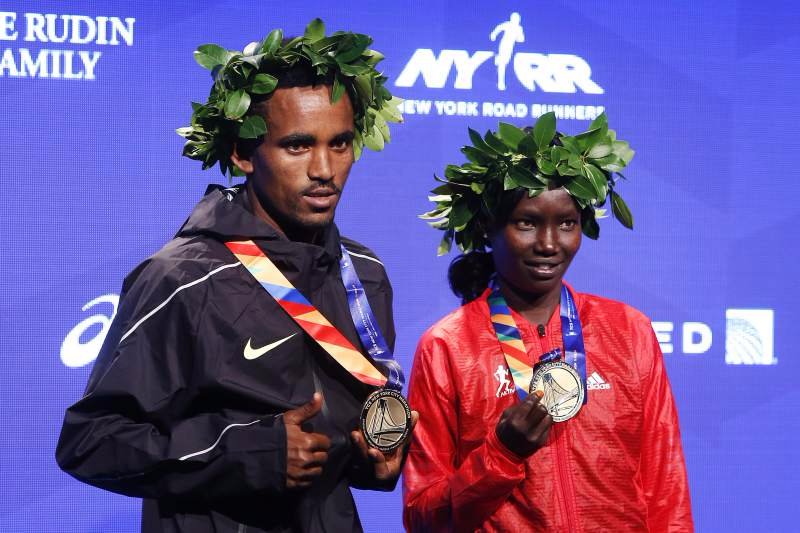 The world-class field representing 27 countries will include 22 Olympians, 11 Paralympians and 16 athletes 10 in the open division and seven in the wheelchair division who have previously finished on the New York City Marathon podium.

�"Having Ghirmay, Marcel, and Mary return to the streets of New York to defend their titles among a group of athletes from 27 countries around the world is a true testament to the TCS New York City Marathon being one of the most world-class and universally diverse sporting events," said Peter Ciaccia, president of events for New York Road Runners and race director of the TCS New York City Marathon. �"The talented group of international athletes joining us this year, will be looking to push the sport even further by chasing after records, personal bests and an increased prize purse for the wheelchair division. These athletes will be sure to excite the more than one million fans who line the streets, and close to one billion TV viewers worldwide."

Ghebreslassie, 21, became the youngest men's winner in the history of the New York City Marathon last year, breaking the tape in2:07:51. He posted the third-fastest winning time in history, and was the first Eritrean winner in race history. In 2015, he became the youngest winner in IAAF World Championships Marathon history, and his gold medal was Eritrea's first ever at the event. He was fourth at the Rio 2016 Olympic Marathon and owns a personal-best of2:07:46from the 2016 Virgin Money London Marathon, where he also finished fourth.

�"I'm proud to return to New York to defend my title as the TCS New York City Marathon champion," Ghebreslassie said. �"The crowds along the course are fresh in my memory, and I will work hard to do well again this year."

Hug, 31, held off Australia's Kurt Fearnley in a sprint finish last year to win his second New York City Marathon title by a whisker. Both men were given the same time � 1:35:49– with Hug winning by a mere sixth hundredths of a second. Itwas Hug's sixth consecutive victory in a major marathon, which is believed to be an unprecedented feat for a men's wheelchair racer, and he went on to become the first-ever Abbott World Marathon Majors Wheelchair Series champion. An eight-time Paralympic medalist, Hug added to his already stacked international resume this summer with three gold medals at the World Para Athletics Championships in London.

�"I'm excited to be coming back to New York City in search of my third title," Hug said. �"Last year was such a thrilling sprint to the finish. Year after year, the TCS New York City Marathon draws the top wheelchair athletes in the world, so it promises to be a battle to the finish once again."

Keitany, 35,has won the TCS New York City Marathon each of the last three years, including a dominating performance last year in which she surged ahead at Mile 14 to finish the course on a solo run in2:24:26. Her3:34margin of victory was the greatest in the women's race since 1980, and she became the first able-bodied runner since Grete Waitz to win the event three years in a row.Keitany is a two-time winner of the Abbott World Marathon Majors, taking the series titles in 2012 and 2016.This year,she won her third career Virgin Money London Marathon in April, breaking the women's only marathon record in a blistering time of2:17:01.

The 2017 TCS New York City Marathon is part of the Abbott World Marathon Majors, a series made up of the world's six largest and most renowned road races the Tokyo, Boston, Virgin Money London, Bank of America Chicago, and TCS New York City Marathons. This year's series also includes the IAAF World Championship Marathon. Points are allocated to the top five finishers in each race. The Abbott World Marathon Majors prize structure was expanded for this year to reward the top three men's and women's finishers in both the open and wheelchair series, with a total prize purse of $1,100,000. A new charity program was introduced, which will give a total donation of $280,000 in the name of the winners of each of the races that make up Series XI. Each race winner in the open and wheelchair divisions will be honored with an Abbott World Marathon Majors $10,000 donation.

The TCS New York City Marathon is the premier event of New York Road Runners (NYRR) and the largest marathon in the world. Over 1,000,000 people have finished the race since its first running in 1970 with just 127 entrants and 55 finishers running four laps around Central Park. The race expanded to all five boroughs in 1976 and just celebrated its 40th year as a five-borough affair. Held annually on the first Sunday of November, the race features over 50,000 runners including the world's top professional athletes and a vast range of competitive, recreational, and charity runners. Participants fromapproximately125 countries tour the city, starting on Staten Island at the foot of the Verrazano-Narrows Bridge and running through the neighborhoods of Brooklyn, Queens, and the Bronx before ending in Manhattan. The NYRR Youth Invitational at the TCS New York City Marathon covered 1.8 miles of the race course in Central Park, beginning near mile 24 and finishing at the famed TCS New York City Marathon finish line. More than one million spectators and thousands of volunteers line the city streets insupport of the runners, while millions more watch the television broadcast in 175 countries and territories, including viewers in the New York area on WABC-TV, Channel 7, nationally on ESPN2, and via various international broadcast partners. The race is part of the Abbott World Marathon Majors, which features the world's top marathons�Tokyo, Boston, London, Berlin, Chicago, and New York�and crowns the top professional male and female marathoners each year. Tata Consultancy Services (TCS), a leading global IT services, consulting, and business solutions organization, is the premier partner of NYRR and the title sponsor of the TCS New York City Marathon. The 47th running of the TCS New York City Marathon is set forNovember 5, 2017. To learn more, visitwww.tcsnycmarathon.org.