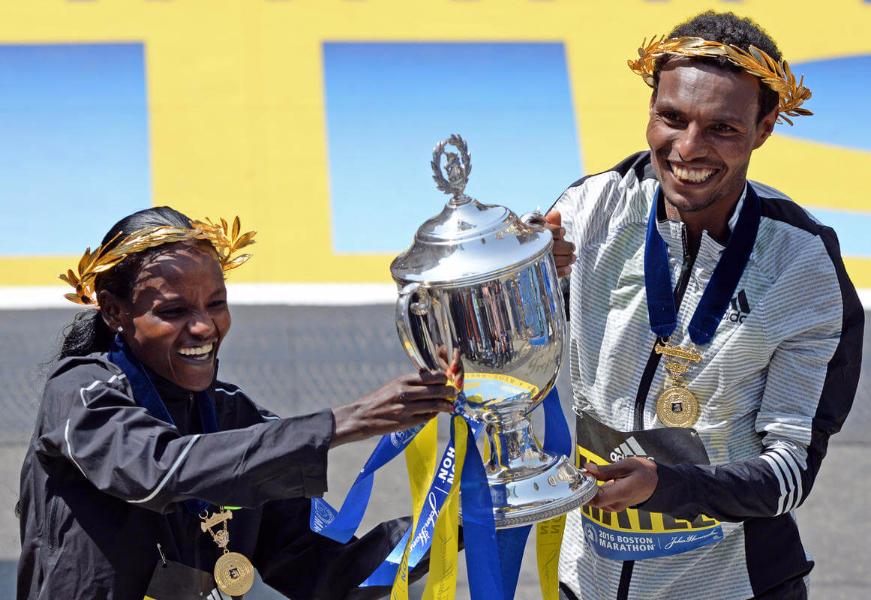 Veteran champions will lead an impressive professional field April 17 in Boston, at the conclusion of Abbott World Marathon Majors Series X of the 11-year-old �grand slam' of marathon running, in which male and female athletes score points for their finishing positions at six of the best-known big city marathons in the world, plus those held at World Championships and Olympic or Paralympic Games.

With just one race to go, the AbbottWMM Series X women's title is up for grabs as Eliud Kipchoge, Marcel Hug and Tatyana McFadden have clinched, respectively, the men's, men's wheelchair and women's wheelchair Series X crowns.

Ethiopian Baysa currently has 25 AbbottWMM points from her 2016 victory, which kick-started the eight-race Series X campaign 12 months ago. She could be in a position to claim an AbbottWMM title if she wins on Monday, putting her in a tie with Jemima Sumgong.

A woman's champion will be named at a later date, once the investigation and any potential appeal process, is complete for Sumgong, who recently tested positive in an out-of-competition doping test. More information can be found here.

Any athlete who has been found guilty of any anti-doping rules enforced by the IAAF, WADA, National Federations or any of the individual AbbottWMM races is not eligible to win an AbbottWMM Series title.

Baysa faces a daunting task, however, for she will need to beat three women who have run quicker than 2:20 2015 Berlin Marathon champion, Gladys Cherono, double world champion and two-time AbbottWMM champion, Edna Kiplagat, and fellow Ethiopian Buzunesh Deba, who set the Boston course record when she won in 2014.

Baysa won in dramatic fashion 12 months ago, coming from behind to overtake the leaders in the final 5km, and two of those she passed will also be on the start line in 2017 Valentine Kipketer, who eventually placed fifth last year, and Joyce Chepkirui, who was third. The 2015 Boston champion, Caroline Rotich, is also in the line-up and she will be keen to regain her title from two years ago.

US marathon fans have high hopes too with Rio Olympic seventh placer Desiree Linden the fifth quickest in the women's elite field. She was second in Boston back in 2011.

Defending men's champion Hayle, also of Ethiopia, could join 2016 Virgin Money London and Olympic marathon winner Kipchoge at the top of the men's standings if he can retain his Boston title.

Hayle made his winning move in the last 2km last year, and it may well be a late surge that proves decisive this time too as he will have to contend with eight other men who hold lifetime bests quicker than 2 hours 7 minutes.

Top of the list is a formidable Kenyan pair Emmanuel Mutai, a former AbbottWMM champion whose best of 2:03:13 makes him the fourth fastest of all time, and Sammy Kitwara, who has been on the Bank of America Chicago Marathon podium three times and placed second in Amsterdam last October.

They will have a trio of quality compatriots for company in three-times Amsterdam champion Wilson Chebet, 2012 Boston champion Wesley Korir, and Geoffrey Kirui, who was third at the Rotterdam Marathon last year.

Hayle won't face the Kenyan threat alone, however, for he has three fellow Ethiopians alongside him. They are Yemane Tsegay, who was third last year, Dino Sefir, the 2016 Barcelona and Ottawa champion, and Sisay Lemma, the 2015 Frankfurt champion.

Hug and McFadden may be assured of the US$50,000 AbbottWMM wheelchair prize, but they will have to be at their best to repeat last year's Boston victories.

Hug won a three-way photo finish with Ernst van Dyk and Kurt Fearnley 12 months ago and both are in the field again along with previous Boston champions Josh Cassidy of Canada, and the Japanese pair Masazumi Soejima and Kota Hokinoue.

Hug will be keen to finish off Series X in style after losing his 100 percent record at in Tokyo at the end of February when he was beaten by Japanese youngster Sho Watanabe.

Van Dyk was given second place last year but it is Fearnley who has been Hug's chief challenger for most of the last 12 months, the Australian finishing second to Switzerland's �Silver Bullet' in London, Rio, Chicago and New York.

McFadden won the quartet of Boston, London, Chicago and New York titles for the fourth year in a row in 2016, but missed out on Paralympic marathon gold when she was overtaken by Zou Lihong. Her Boston appearance will be her first 2017 competitionafter recovering from surgery.

The Chinese athlete isn't in the Boston field, but Manuela Sch�r and Amanda McGrory, the women who sit second and third in the standings, will be on the start line. Switzerland's Sch�r won the Berlin title last September and placed second behind McFadden four times in 2016, while McGrory took Paralympic bronze and won this year's Tokyo Marathon.

Series XI of the Abbott World Marathon Majors will start just six days after the Boston Marathon at the 2017 Virgin Money London Marathon on April 23, featuring a new format and prize structure.