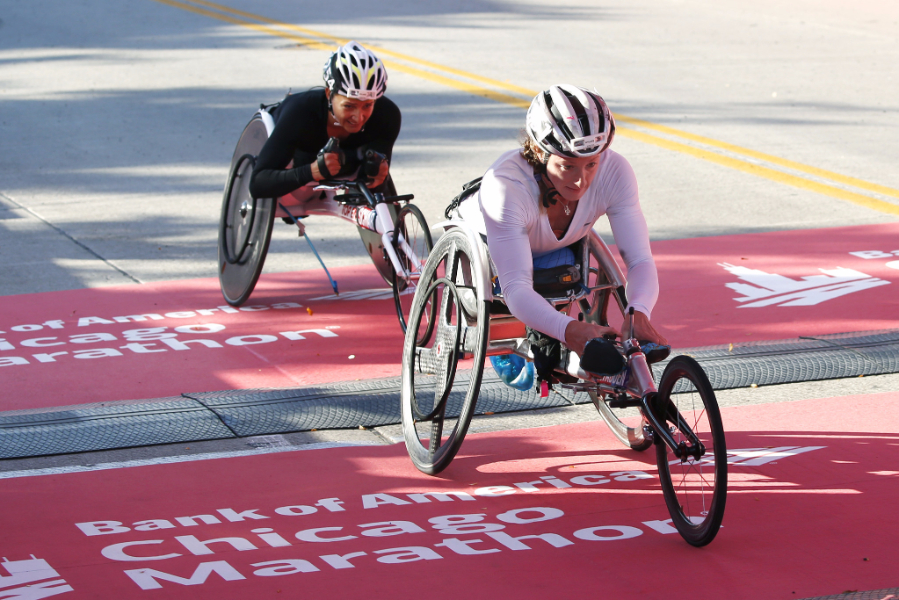 McFadden and Hug stand out among one of the most internationally diverse and talented professional wheelchair fields in Chicago Marathon history. Twenty-four Paralympians from 12 countries will descend upon the windy city on October 8 to vie for the Chicago Marathon crown, and to score points in the global chase for the AbbottWMM Series XI title.

"Tatyana became the most decorated champion in Chicago Marathon history last fall. When she comes to Chicago to race, people understand that they are watching one of the greatest champions in sport perform," said Bank of America Chicago Marathon Executive Race Director Carey Pinkowski. "And Marcel won an unprecedented six consecutive major marathons last year. We are excited to have him competing again in Chicago for the third time. The entire field is truly outstanding, and we expect to see photo finishes on both sides."

McFadden, a 17-time Paralympic medalist (including seven gold medals) and the Chicago Marathon course record-holder (1:41:10), made history in 2013, 2014, 2015 and 2016 as the only athlete to win four AbbottWMM races in one year: London, Boston, Chicago and New York City. She closed out her 2016 season as the 2016-17 AbbottWMM Series X champion, and she returns to the windy city to capture her seventh consecutive Chicago Marathon title and her eighth in the last nine years. McFadden's 2017 season got off to a rocky start. She suffered from blood clots before the Boston Marathon and competed just a few weeks after having surgery. Although she set a new personal best (1:35:05), she finished in fourth place after being undefeated in Boston since 2013. She skipped the World Para Athletics Marathon World Cup in London, but she made a valiant comeback on the track, winning four gold medals in the 200m, 400m, 800m and 1,500m. Her performance on the oval sends a strong message that she is back and ready to win.

McFadden's run through 29 dynamic Chicago neighborhoods will be strongly contested by Manuela Schär (SUI) and Amanda McGrory (USA). Schär and McGrory are first and second, respectively, on the AbbottWMM Series XI leaderboard, with Schär leading McGrory by nine points. Also in the mix – and ranked third on the AbbottWMM leaderboard – is University of Illinois Urbana-Champaign alum Susannah Scaroni (USA).

Schär, a four-time Paralympian, made her Bank of America Chicago Marathon debut in 2013 in convincing fashion, finishing second by two seconds behind McFadden. The pattern between McFadden and Schär continued in Chicago, with Schär finishing as the runner-up again in 2014, 2015 and 2016,; but this could be the year she finally tastes victory, given her 2017 season. After finishing second in Tokyo, she rose to the top, finishing first in Boston (in a new personal and world best, 1:28:17) and first at the 2017 World Para Athletics Marathon World Cup in London. She also competed well on the track at the world championships, finishing with a silver medal in the 800m, fifth in the 400m and 5,000m, and seventh in the 1,500m. Schär's 1:38:07 in Oita is recognized as the current world record (run on a record-eligible course; she and Wakako Tsuchida share the record – they finished first together in Oita).

McGrory, a three-time Chicago Marathon champion (2007, 2008, 2010), a three-time Paralympian and a seven-time Paralympic medalist, started her 2017 season on a positive note, picking up wins at the Tokyo Marathon, the Bank of America Shamrock Shuffle 8K and Grandma's Marathon (her eighth time winning in Duluth). She finished second in Boston in a new personal best, 1:33:13, and she was second at the 2017 World Para Athletics Marathon World Cup in London. At the 2017 world championships on the track, she scored two bronze medals in the 800m and 1,500m and a silver in the 5,000m. Combined, McFadden and McGrory have won every Chicago Marathon since 2007, a testament to the strength, influence and impact of the University of Illinois at Urbana-Champaign Wheelchair Track and Road Racing Program.

Scaroni, a two-time Paralympian, has come a long way since her debut marathon at the 2011 Chicago Marathon. Since then, she has raced internationally in London, Rio and Tokyo and nationally in Boston, New York, Los Angeles, Minneapolis and Duluth. After finishing second to McFadden at the 2012 Chicago Marathon, she turned around and won the 2013 Los Angeles Marathon and then broke the course record at the Twin Cities Marathon. She started 2017 with podium finishes all around: she was third in Tokyo, third in Boston (in a personal best, 1:33:17) and third at the 2017 World Para Athletics Marathon World Cup in London. She continued her success on the track – finishing with a pair of sixth-place finishes at the world championships in the 800m and 5,000m. Scaroni should be in the hunt for the win in Chicago.

Hug leads a crowded field of stars as more than 20 of the world's best professional wheelchair athletes set the stage for another year of thrilling sprint finishes down Columbus Drive. Four of the top five men (Hug, Fearnley, Van Dyk and Botello Jimenez) commanding the AbbottWMM Series XI leaderboard will face off on October 8.

Kurt Fearnley (AUS), a veteran of more than 50 marathons (with over 30 career victories) and Chicago's most decorated male champion, became a household name in Chicago after completing the three-peat from 2007-2009 and then adding two more victories in 2011 and 2015. At the 2014, 2015 and 2016 Chicago Marathons, Fearnley was part of historic sprint finishes. In 2014, the top 11 professional wheelchair athletes finished within 11 seconds; in 2015, the top 11 men finished within 13 seconds; and in 2016, the top nine men were within 16 seconds. Hug edged out Fearnely at the finish by one second last fall, and then repeated the feat at the New York City Marathon. Fearnley opened his 2017 by finishing third at the World Para Athletics Marathon World Cup (behind David Weir and Hug). One week earlier, he finished fourth in Boston. Throughout his career, Fearnley has captured 13 medals across five Paralympic Games, including a pair of gold medals in the 2004 and 2008 Paralympic Marathon (he won the silver in 2016). He also won four consecutive TCS New York City Marathons from 2006 to 2009.

Josh George (USA) competed in his first Chicago Marathon in 2002 at 18 years old, finishing fourth among a talented field that included U of I coach Adam Bleakney. He has finished in the top five of the race 11 times, and he is a four-time Chicago Marathon champion, including back-to-back victories in 2003 and 2004, another in 2006 and a nail-biting victory in 2014 where he was chased to the line by 10 men in a sprint finish. George missed defending his 2014 title by two seconds, and he followed Hug and Fearnley to the line in both 2016 and 2017. He started 2017 with a fifth-place finish in Tokyo, a sixth-place finish and a PR in Boston (1:21:47), and an eighth-place finish in London at the World Para Athletics Marathon World Cup. He is a six-time world champion and a four-time Paralympian.

Ernst Van Dyk (RSA) won the 2013 Chicago Marathon after an exciting dash to the finish, and he almost became a back-to-back champion in 2014, but George and Fearnley beat him at the line. He finished fourth in 2015 and sixth last year. Van Dyk has won the Boston Marathon a record 10 times, including six in a row from 2001 to 2006. He started 2017 with a second-place finish in Boston (his fourth runner-up finish in Boston) and a fourth-place finish at the World Para Athletics Marathon World Cup in London. He has competed in every Paralympic Games since 1992.

For more information on the 2017 Bank of America Chicago Marathon elite field, visitchicagomarathon.com.

About the Bank of America Chicago Marathon
In its 40thyear, the Bank of America Chicago Marathon welcomes thousands of runners from more than 100 countries and all 50 states, including a world-class elite field, top regional and Masters runners, race veterans, debut marathoners and charity runners. The race's iconic course takes runners through 29 vibrant neighborhoods on an architectural and cultural tour of Chicago. Annually, an estimated 1.7 million spectators line the streets cheering on more than 40,000 runners from the start line to the final stretch down Columbus Drive. As a result of the race's national and international draw, the Chicago Marathon assists in raising millions of dollars for a variety of charitable causes while generating $277 million in annual economic impact to its host city. The 2017 Bank of America Chicago Marathon, a member of the Abbott World Marathon Majors, will start and finish in Grant Park beginning at 7:30 a.m. on Sunday, October 8. In advance of the race, a two-day Abbott Health & Fitness Expo will be held at McCormick Place Convention Center on Friday, October 6, and Saturday, October 7. For more information about the event and how to get involved, go tochicagomarathon.com.