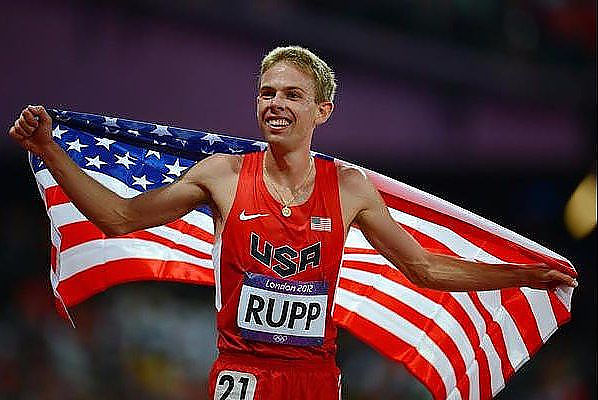 �"Galen and Jordan are huge talents who have the ability to capture podium finishes. The last time we had an American male and female place in the top three together was 1996. And we have a deep field of Americans who can shake things up this year - Luke Puskedra, Diego Estrada, Sam Chelanga, Sarah Crouch, Becky Wade and Alia Gray, to name a few," said Executive Race Director Carey Pinkowski. �"And Joanie is a legend. To have Joan attempting a record in Chicago allows us the opportunity to celebrate her as an American icon and running legend."

Sam Chelanga, a two-time NCAA champion in the 5,000m and 10,000m and the NCAA 10,000m record holder, will make his second attempt at the marathon distance. After becoming a U.S. citizen in 2015, Chelanga (with a half marathon personal best of 1:01:04) made his marathon debut at the 2016 U.S. Olympic Marathon Trials. After briefly moving to the front of the race amid hot and humid conditions, he eventually lost contact with the lead pack and dropped out. In 2016, Chelanga won the U.S. 10 Mile Championships, and he has started 2017 with a bang, winning both the World's Best 10K in San Juan and the New York Healthy Kidney 10K. He also finished 11th at the IAAF World Cross Country Championships.

Luke Puskedra and Jeffrey Eggleston boast impressive résumés with 2:10 marathon performances. Puskedra experienced a breakthrough at the 2015 Chicago Marathon, smashing his PR by five minutes and stopping the clock in 2:10:24, making him the fastest American marathon runner in 2015. He narrowly missed out on the opportunity to represent the U.S. in Rio when he finished fourth at the U.S. Olympic Marathon Trials in 2016. He started 2017 with a strong performance in Boston, finishing ninth in 2:14:45.

Eggleston made his marathon debut in 2010 and ran his personal best (2:10:52) at the 2014 Gold Coast Airport Marathon in Australia. He has represented the U.S. at three IAAF World Championships in the marathon (2011, 2013 and 2015), finishing as high as 13th in 2013. He kicked off 2017 with back-to-back marathons, finishing fourth in Warsaw in April and then winning the Movistar Marathon in Lima, Peru in May.

Aaron Braun, Diego Estrada and Andrew Bumbalough also bring strong personal bests to this year's American lineup. Braun, a versatile runner from 5,000m to the marathon and a 16-time All American at Division II Adams State, grabbed headlines in 2013 when he won the U.S. 12K National Championships. He made his marathon debut in 2014 and ran his personal best (2:12:54) in Houston in 2015. Most recently, he placed fifth at the U.S. 25K National Championships.

Estrada, a 2012 Olympian, shot to the top of the elite ranks in 2015 after he became the fourth-fastest American half marathon runner in history, winning the U.S. National Half Marathon Championships in 1:00:51. He completed his first marathon in Chicago last year, cracking the top 10 in 2:13:56. Estrada took a hard fall at the 10K aid station and ran the final 20 miles on a badly swollen ankle. He returned to Chicago this spring and placed second to Stephen Sambu at the Bank of America Shamrock Shuffle 8K.

Derrick made a name for himself as a high school student at Neuqua Valley High School in Naperville, Ill. He is a former American junior record holder in the 5,000m, a 14-time All American at Stanford University and a three-time U.S. cross country national champion. He will be making his much-anticipated marathon debut on the heels of two standout performances: a 1:01:12 at the New York City half marathon and as one of the elite pacers for Nike's Breaking2 project (where 2014 Chicago Marathon champion Eliud Kipchoge became the fastest marathoner in history with a stunning 2:00:25 performance).

Droddy's image went viral after his appearance at the 2016 U.S. Olympic Trials 10,000m. His long hair, mustache, tinted sunglasses and backwards hat set off a social media bonanza with everyone asking the same question, �"Who is Noah Droddy?" While Droddy, a former Division III All American, struggled at the trials, he has gained national respect. His most recent performance at the New York City half marathon, 1:01:48, speaks volumes about his potential in his marathon debut.

Hasay, a member of the Nike Oregon Project, turned heads at the 2017 Boston Marathon with a spectacular debut performance. She finished third in 2:23:00, the fastest marathon debut ever by an American woman by almost three minutes, and the fourth-fastest Boston Marathon time in history by an American woman. Before her impressive performance in Boston, she recorded the third-fastest time ever by an American woman in the half marathon, 1:07:55, at the Prague Half Marathon (only Molly Huddle and Deena Kastor have run faster). And prior to turning her attention to the roads in 2016, Hasay focused on the track, initially making her name as a 1,500m runner (she competed in the 2008 Olympic Trials as a high school runner). She was a two-time Foot Locker Cross Country national champion in high school and a 15-time All American at the University of Oregon. The Bank of America Chicago Marathon marks her second go at the marathon distance.

Becky Wade and Sarah Crouch stand out as two women with the potential to break 2:30. Wade made a splash in her marathon debut, bursting onto the elite scene with a 2:30:41 win at the 2013 California International Marathon. After struggling in her next two marathons, Wade announced her comeback this year in Houston, landing on the podium in third place in 2:35:57. Crouch, a 13-time Division II All American, returns to Chicago after strong performances in 2014, 2015 and 2016. She subtracted 12 minutes from her personal best in 2014 to finish sixth in 2:32:44. After missing the Olympic Marathon Trials in 2016, Crouch regained her footing in Boston as the second American woman across the line. She ended the year with a ninth-place overall finish in Chicago.

Alia Gray, Danna Herrick and Dot McMahan deepen this year's field. Gray, coached by the legendary Joe Vigil, surprised fans at the 2016 U.S. Olympic Marathon Trials. After an unconventional build-up due to injury, she notched a 10th place finish and a personal best of 2:35:47. She arrived in Chicago last year seeking to dip under 2:30, and ran strong to a new PR, finishing in an even 2:34:00 and 10th overall.

Herrick recently transitioned from being a self-coached runner to a professional athlete with the Hansons-Brooks Distance Project. She experienced a massive breakthrough this spring in Boston, taking almost six minutes off of her personal best to run 2:34:53. The Bank of America Chicago Marathon marks her third appearance in an Abbott World Marathon Major (AbbottWMM). In addition to running Boston, she raced New York in 2013.

Kristen Heckert and Michelle Lilienthal round out this year's field of top Americans. Heckert, a local runner with Full Potential Running/New Balance, will make her sixth appearance at the Bank of America Chicago Marathon and her second as part of the elite field. She capped off a stellar 2016 season with a 15th-place finish and a personal best at last year's Chicago Marathon, running 2:39:37. Prior to Chicago, she set PRs in the 5K, 8K and 10,000m. Lillienthal boasts a marathon PR of 2:34:50. She is a two-time Olympic Marathon Trials qualifier with roots in the Midwest; she first made a name for herself as a seven-time champion at Iowa City High.

Adding to an outstanding lineup of top Americans, Samuelson hopes to rewrite the record books by accomplishing something no woman has done before: running a sub-three marathon at age 60 (the current record is 3:01:30). Samuelson ran into the record books in Chicago in 1985 when she beat one of the most competitive women's fields in history, defeating world record holder Ingrid Kristiansen and Olympic bronze medalist and defending Chicago Marathon champion Rosa Mota. Samuelson set an American record in 2:21:21 (a record that stood until 2003).

�"Storytelling is important to me and it's how I motivate myself," Samuelson said. �"My race decisions often reflect my narrative. Once I turned 60 I knew that the Oct. 8 Chicago race would represent the next chapter in my career."

Samuelson made progress in her story in 2008 when at the Olympic Trials she succeeded in securing a sub 2:50 at age 50. �"I thought that was my last competitive marathon, but there were more stories for me to tell," she said.

About the Bank of America Chicago Marathon

In its 40th year, the Bank of America Chicago Marathon welcomes thousands of runners from more than 100 countries and all 50 states, including a world-class elite field, top regional and Masters runners, race veterans, debut marathoners and charity runners. The race's iconic course takes runners through 29 vibrant neighborhoods on an architectural and cultural tour of Chicago. Annually, an estimated 1.7 million spectators line the streets cheering on more than 40,000 runners from the start line to the final stretch down Columbus Drive. As a result of the race's national and international draw, the Chicago Marathon assists in raising millions of dollars for a variety of charitable causes while generating $277 million in annual economic impact to its host city. The 2017 Bank of America Chicago Marathon, a member of the Abbott World Marathon Majors, will start and finish in Grant Park beginning at 7:30 a.m. on Sunday, October 8. In advance of the race, a two-day Abbott Health & Fitness Expo will be held at McCormick Place Convention Center on Friday, October 6, and Saturday, October 7. For more information about the event and how to get involved, go to chicagomarathon.com.