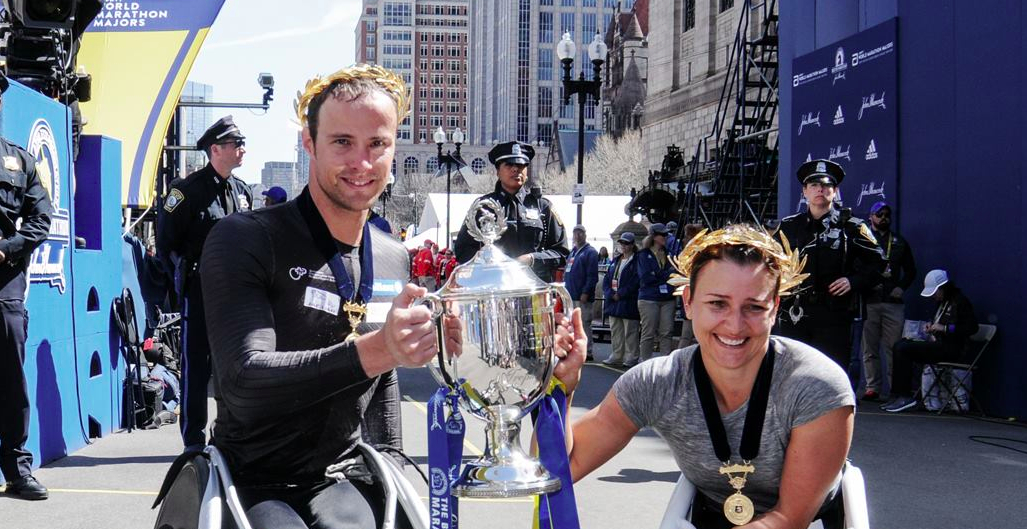 Marcel Hug and Manuela Schar of Switzerland will return to defend their titles at the 2018 Boston Marathon on 16 April. The pair, both runaway leaders in the Abbott WMM Series XI wheelchair competitions, will look to continue their string of success on the roads leading to Boylston Street.

Hug, the three-time defending champion, aims to become the third men‚Äôs wheelchair competitor to earn a four-peat in Boston Marathon history, joining Ernst van Dyk (who has accomplished the feat twice) and Swiss legend Franz Nietlispach. Schar will look to join Edith Hunkeler as the only Swiss woman to win a pair of Boston titles. Jean Driscoll has the record for most Boston Marathon Women‚Äôs Wheelchair titles at eight.

‚ÄúWith eight Boston Marathon champions returning, this year‚Äôs race for the push rim wheelchair titles will be fierce,‚Äù said Tom Grilk, CEO of the B.A.A. ‚ÄúComing off a year where two world bests were set in Boston, and the Abbott World Marathon Majors Series X champions were crowned here, the anticipation is high for dramatic races."

In 2017, both Hug and Schar set new course records and world bests on the Boston course. Hug won a sprint to the line over ten-time Boston Marathon champion van Dyk, where both crossed the stripe in 1:18:04. Van Dyk will also return to Boston with hopes of reclaiming the top spot for the first time since 2014. He is the most decorated champion in event history.

Schar shaved more than five minutes from the previous course record of 1:34:06, covering the course in 1:28:17 a year ago. After finishing second in 2016, Schar earned her first Boston victory and became the first woman to ever dip under 1:30:00 in the wheelchair marathon. Hug and Schar also won the TCS New York City Marathon last fall.

They are both also heading for Tokyo at the end of February in search of yet more points for their Series XI totals.

Schar won‚Äôt have an easy run to the finish, though, as four-time champion Tatyana McFadden returns once again after placing fourth last year. After sweeping the Abbott World Marathon Majors from 2013 to 2016, McFadden returns after timing her fastest Boston in 2017 (1:35:05). She‚Äôs known to push the pace especially on the uphills late in the course.

Other champions returning to Boston include Japan‚Äôs Masazumi Soejima (2007, 2011) and Hiroyuki Yamamoto (2013); Canada‚Äôs Joshua Cassidy (2012); and Arizona‚Äôs Shirley Reilly (2012). Yamamoto placed third in the men‚Äôs division last year, while Cassidy is the former Boston course record holder with a best of 1:18:25.

Americans Amanda McGrory and Susannah Scaroni will aim to move up on the podium in 2018 after placing second and third a year ago. Each is searching for their first Boston title.

Making her Boston Marathon debut is Annika Zeyen of Germany. A gold and silver medalist at the Paralympic Games in wheelchair basketball for the German national team, Zeyen has transitioned to wheelchair marathon racing over the last two years and placed sixth at the 2017 TCS New York City Marathon.¬†