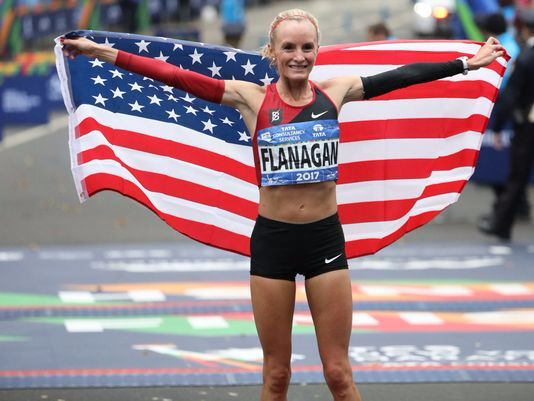 BOSTON, MA, December 11, 2017¬≠¬≠¬≠¬≠¬≠¬≠-- John Hancock today announced its strongest U.S. Elite Team since its principal sponsorship began in 1986. The team, recruited to compete against an accomplished international field, will challenge for the coveted olive wreath on Patriots' Day, April 16, 2018.

Also returning to Boston are Jordan Hasay and Shadrack Biwott. Hasay placed third at the 2017 Chicago Marathon, and set the American marathon debut record at Boston this year when she ran 2:23:00. Biwott finished as the second American and fourth overall in Boston this year. Serena Burla, Ryan Vail, Sara Hall, Scott Smith, Kellyn Taylor, and Andrew Bumbalough will also compete on the John Hancock U.S. Elite Team at the 122nd running of the Boston Marathon.

"The 2018 John Hancock U.S. Elite Team represents a dedicated group of athletes who have consistently challenged themselves to compete with great success on the world stage," said John Hancock Chief Marketing Officer Barbara Goose. "We are honored to invite this team to the Boston Marathon to lead 30,000 runners along the world's most historic marathon route."

"In the Boston Marathon's 122-year history, one will be hard pressed to find a more accomplished American field than the one John Hancock has established for 2018," said Tom Grilk, CEO of the B.A.A. "With Olympic medalists, Abbott World Marathon Majors winners, American record holders and more, this will be the most decorated U.S. fields in Boston Marathon history. Many familiar faces return to the roads leading to Boston, while others will be making their long-awaited debuts. And of course, it will be especially engaging for local fans to welcome Marblehead's own Shalane Flanagan back to follow up her magnificent triumph in New York."

Shalane Flanagan is the newly crowned New York City Marathon champion, racing to the first U.S. women's title since 1977. A four-time Olympian, Flanagan holds American records in the indoor 3,000m and 5,000m and in the10K, 15K and 25K. She won the silver medal in the 10,000m at the 2008 Olympics and won the bronze medal at the 2011 IAAF World Cross Country Championships. Flanagan was the 2012 U.S. Olympic Marathon Trials champion and then finished ninth in the 2012 Olympic Marathon. Last year she was third at the 2016 Trials and sixth at the 2016 Olympic Marathon in Rio de Janeiro.

Desiree Linden, a two-time Olympian, returns to Boston after finishing fourth this year. At the 2016 U.S. Olympic Trials she finished second and then was seventh at the Olympics. A top-five finisher in seven Abbott World Marathon Majors, Linden narrowly missed winning Boston in 2011 by two seconds. Additional accomplishments include placing second at the 2010 Chicago Marathon, tenth at the 2009 IAAF World Marathon Championships, second at the 2012 U.S. Olympic Marathon Trials and second in the 10,000m at the 2015 Pan American Games.

Dathan Ritzenhein is the third fastest U.S. marathoner of all time with a 2:07:47 personal best. Career highlights for the three-time Olympian include finishing ninth at the 2008 Olympic Marathon, winning the bronze medal at the 2009 IAAF World Half Marathon Championships and finishing 13th at the 2012 Olympic Games 10,000m. This year he won the U.S. 25K National Championships.

Abdi Abdirahman placed sixth at the 2017 Boston Marathon, and earned the Masters Division title. He also finished seventh in New York City this year. In 2016, he finished as the top American and third overall at the New York City Marathon. Abdirahman is a multiple national champion in the 10,000m, 10K, 10-mile and Half Marathon. He placed third in the 2012 U.S. Olympic Marathon Trials, but did not finish the Olympic Marathon due to injury.

Deena Kastor is a three-time Olympian and the U.S. record holder in the marathon and the half marathon. Kastor won the 2004 Olympic Marathon bronze medalist, the 2005 Chicago Marathon, the 2006 London Marathon, and the 2008 U.S. Olympic Trials Marathon. She has earned 18 national titles across various distances and won two silver medals at the IAAF World Cross Country Championships.

Molly Huddle is a has earned more than 20 national championship titles on the track and roads. She set the American 10,000m record of 30:13.17 with her sixth-place finish at the 2016 Olympics. Huddle is a three-time winner of the B.A.A. 5K, and set an American record of 14:50 at the event in 2015. She has also won the New York City Half Marathon the past three years. In her marathon debut, she ran to a third place at the 2016 New York City Marathon.

Jordan Hasay set an American debut record of 2:23:00 with her third-place finish in Boston this year. She improved her time by two minutes at the Chicago Marathon, finishing third in 2:20:57. An 18-time All-American at the University of Oregon, Hasay won the 2007 IAAF World Youth Championships 1500m silver medal. She also won USA National Championship titles at 15K and 20K on the roads in 2017.

Shadrack Biwott finished as the second American and fourth overall at this year's Boston Marathon. Only his University of Oregon teammate Galen Rupp finished higher with a second-place finish. Biwott finished seventh at the U.S. Olympic Trials Marathon and fifth at the 2016 New York City Marathon with a personal best time of 2:12:01.

Serena Burla finished 10th and 11th at the 2015 and 2017 IAAF World Championships Marathon, respectively. Burla set her personal best marathon this year in Osaka, running 2:26:53. In 2013, she finished runner-up at the Amsterdam Marathon. A cancer survivor, Burla was diagnosed with synovial sarcoma in her right hamstring. She had part of her right hamstring removed in 2010, and had another malignant tumor removed this year after the World Championships.

Sara Hall ran three marathons in 2017: She won the U.S. National Marathon Championships, set a personal best time at the Frankfurt Marathon (finishing fifth in 2:27:21), and placed sixth at the Tokyo Marathon. She is married to Ryan Hall, who holds the American course record of 2:04:58 at the Boston Marathon.

Ryan Vail ran to an eighth-place finish at the BMW Berlin Marathon this year against a highly competitive field. A four time U.S. World Cross Country team member, Vail's highest finish was 17th in 2013. He earned his best marathon time of 2:10:57 with a tenth place at the 2014 London Marathon.

Kellyn Taylor, the 2015 Pan American bronze medalist in the 5,000m, has run four marathons with impressive results. At the 2015 Houston Marathon she finished sixth, and followed that performance up with a sixth place at the 2016 U.S. Olympic Marathon Trials. This year she placed 13th at the Virgin Money London Marathon and eighth at the New York City Marathon.

Andrew Bumbalough has represented the United States twice in cross country and twice on the track in international championships. He won the USA 5K National Championship in 2013, and placed fifth at the New York City Half Marathon in 2015. He made his marathon debut in Tokyo this year, finishing as the top American, and followed that up with a 13th place finish at the Chicago Marathon.

The 2018 Boston Marathon marks the 33rd year of John Hancock's landmark sponsorship of the legendary race. The complete elite international field will be announced in a few weeks. For additional information about the elite athlete program and sponsorship, please visit www.johnhancock.com/bostonmarathon/sportspartnerships.html or follow us @jhboston26 and @johnhancockUSA on Twitter.

About John Hancock and Manulife

John Hancock is a division of Manulife Financial Corporation, a leading international financial services group that helps people achieve their dreams and aspirations by putting customers' needs first and providing the right advice and solutions. We operate primarily as John Hancock in the United States, and Manulife elsewhere. We provide financial advice, insurance and wealth and asset management solutions for individuals, groups and institutions. Assets under management and administration by Manulife and its subsidiaries were over $1 trillion (US$806 billion) as of September 30, 2017. Manulife Financial Corporation trades as MFC on the TSX, NYSE, and PSE, and under 945 on the SEHK. Manulife can be found at manulife.com.

One of the largest life insurers in the United States, John Hancock supports approximately 10 million Americans with a broad range of financial products, including life insurance, annuities, investments, 401(k) plans, and college savings plans. We also offer advice through Signator, a network of independent financial advisors. Additional information about John Hancock may be found at johnhancock.com.