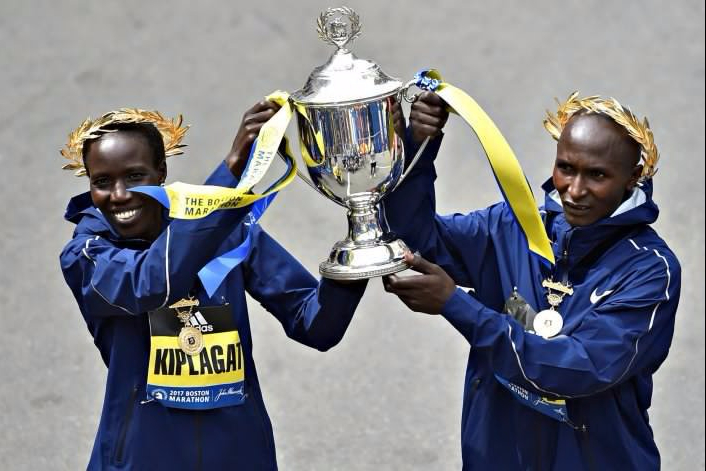 BOSTON, MA, December 6, 2017 ‚ÄîJohn Hancock today announced the return of 2017 Boston Marathon champions Edna Kiplagat and Geoffrey Kirui for the 122nd running of the race on April 16, 2018. The 2018 Boston Marathon marks the 33rd year of John Hancock‚Äôs landmark sponsorship of the legendary race.

‚ÄúI am so happy to accept the invitation from John Hancock to return to Boston next year as the defending champion of this historic race,‚Äù said Kiplagat. ‚ÄúAfter racing all around the world, it was so special for me to run on Boston‚Äôs historic course and experience the Boston traditions with my family. I could see firsthand how special the city of Boston, all the towns along the course, and the community is to so many people. And of course, I look forward to the challenge next April of once again racing against the world‚Äôs best athletes.‚Äù

"2017 was a wonderful year for me with winning both Boston and the World Championships,‚Äù said Kirui. ‚ÄúI‚Äôm happy to return to Boston to defend my title. The tremendous atmosphere, the great history and legendary course all suit me very well.‚Äù

‚ÄúWhen you run Boston, you join a legacy that is over a century in the making,‚Äù said John Hancock Chief Marketing Officer Barbara Goose. ‚ÄúChampions like Edna and Geoffrey exemplify the determination, persistence and spirit that all runners demonstrate when they line up together in Hopkinton to achieve their goals.‚Äù

‚ÄúIn their Boston debuts last April, both Geoffrey and Edna raced with confidence from the start, pulled away late, and solidified their spots in Boston Marathon lore,‚Äù said Boston Athletic Association CEO Tom Grilk. ‚ÄúWe‚Äôre excited to welcome these world-class athletes back as part of the John Hancock Elite Athlete Team.‚Äù

Additional elite field announcements will roll out over the next few weeks.

About John Hancock and Manulife

John Hancock is a division of Manulife Financial Corporation, a leading international financial services group that helps people achieve their dreams and aspirations by putting customers‚Äô needs first and providing the right advice and solutions. We operate primarily as John Hancock in the United States, and Manulife elsewhere. We provide financial advice, insurance and wealth and asset management solutions for individuals, groups and institutions. Assets under management and administration by Manulife and its subsidiaries were over $1 trillion (US$806 billion) as of September 30, 2017. Manulife Financial Corporation trades as MFC on the TSX, NYSE, and PSE, and under 945 on the SEHK. Manulife can be found at manulife.com. One of the largest life insurers in the United States, John Hancock supports approximately 10 million Americans with a broad range of financial products, including life insurance, annuities, investments, 401(k) plans, and college savings plans. We also offer advice through Signator, a network of independent financial advisors. Additional information about John Hancock may be found at johnhancock.¬†