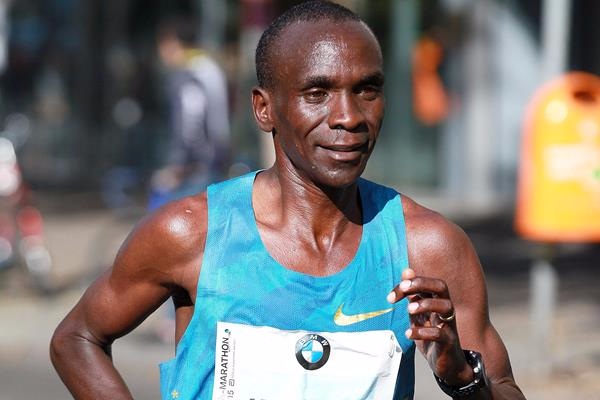 Eliud Kipchoge (Kenya) will make his first appearance in Series XI of the Abbott World Marathon Majors on Sunday, September 24 when he takes on Kenenisa Bekele (Ethiopia) and Wilson Kipsang (Kenya) at the BMW BERLIN MARATHON, a clash described by race director Mark Milde as �"a dream match-up."

Kipchoge sealed the Series X men's title when he added Rio Olympic gold to his victory at the 2016 Virgin Money London Marathon and will make his Series XI debut with one goal in mind: to break the world record of 2:02:57 set by Kenyan compatriot Dennis Kimetto on the flat and fast Berlin course in 2014.

Kipchoge has already run quicker than that this year when he clocked 2:00:25 in an unofficial event on the Formula One track in Monza, Italy in early May. He also holds the third quickest official time of 2:03:05 from his 2016 London victory, a performance Bekele bettered by two seconds in Berlin 12 months ago.

The Ethiopian legend will defend his Berlin title knowing he could leap to the top of the men's standings by adding to the 16 points he bagged for second in London this April. He currently lies third on the leaderboard behind Boston winner Geoffrey Kirui and London champion Daniel Wanjiru, who each have 25 points.

Kipsang will also be looking for his first Series XI points when he returns to the city where he broke Patrick Makau's world record of 2:03:23 in 2013. That mark fell to Kimetto just 12 months later, but Kipsang improved his best when second to Bekele last year in 2:03:13, the equal fourth fastest of all time.

Kipsang, like Kipchoge, has five Majors wins under his belt. Should either man win on Sunday, they would be the first professional male runner to notch six Majors victories since AbbottWMM began in 2006.

Also of note in the men's field is Makau, the former world record holder, who is returning to the Majors for the first time since 2013. Vincent Kipruto, a former Frankfurt and Paris Marathon champion, could also feature among the points winners.

Gladys Cherono will be favorite for maximum points in the women's race and she could join world champion Rose Chelimo and London champion Mary Keitany at the top of the Series XI standings.

Cherono clocked 2:19:25 when she won the Berlin title in 2015 and the Kenyan will be hoping to regain her crown against a quartet of swift Ethiopians led by Amane Beriso, the 2016 Dubai runner-up.

Beriso is joined by 2015 Frankfurt champion Gulume Tollesa and Meseret Mengistu, a former Paris Marathon champion, while Ruta Aga should not be discounted after finishing third last year.

Cherono has company in fellow Kenyan Valary Aiyabei, this year's Prague Marathon champion and the third quickest in the field.

Hug dominated the inaugural AbbottWMM wheelchair contest, winning seven of the eight races, including the Paralympic marathon in Rio. But he was beaten by David Weir in the first race of Series XI as the Briton stormed to a record seventh London Marathon title in April.

Frei has won the Berlin Marathon a record 21 times, most recently in 2013, and the 59-year-old will be keen to pick up points again after placing fifth last year.

Spain's Rafael Botello Jimenez aims to move up the leaderboard by adding to the one point he secured in London, while the Japanese pair of Hiroki Nishida and Ryota Yoshida should also be challenging for podium places. Nishida was third last year, one place ahead of his compatriot.

Swiss hopes will also be high in the women's wheelchair race where defending champion Manuela Sch�r aims to build on her course record-breaking London victory.

Sch�r clocked 1:39:57 in the British capital to knock almost two minutes off Tatyana McFadden's mark, just six days after she had produced the fastest women's wheelchair marathon in history in Boston.

Sch�r will be hoping for a second Series XI victory as she takes on a field that includes her compatriot Sandra Graf, a three-time Berlin winner and Britain's Jade Jones, who lies fifth on the leaderboard after placing fifth in London with a big personal best.

Series XI of the Abbott World Marathon Majors crosses the Atlantic next month for the October 8, 2017 Bank of America Chicago Marathon with the TCS New York City Marathon to come on November 5, followed by the Tokyo, Boston and London Marathons in 2018.