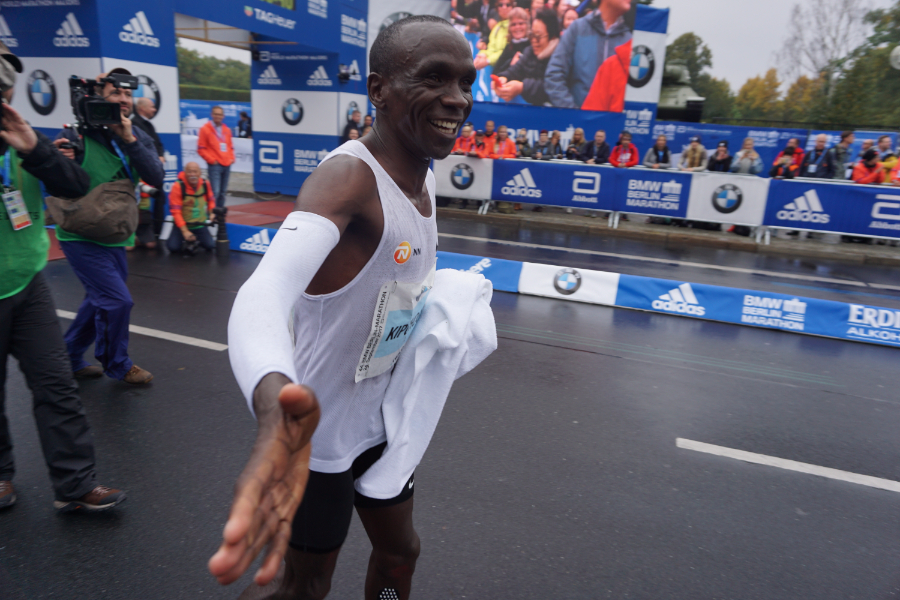 It was Kenya's day at the BMW Berlin Marathon as Eliud Kipchoge and Gladys Cherono won the men's and women's races to claim their first Series XI points in the Abbott World Marathon Majors while Swiss stars Marcel Hug and Manuela Schär enjoyed runaway victories in the wheelchair contests.

Kipchoge, the reigning Abbott WMM men's champion, chalked up his eighth win in nine career marathons when he pulled away from Ethiopian debutant Guye Adola in the closing stages of Sunday's race on the famously fast course around a rain-drenched German capital.

The Olympic champion had made no secret of his desire to break the world record of fellow-Kenyan Dennis Kimetto – a time of 2:02:57 set on this course three years ago – but with damp weather to contend with he had to be satisfied with victory in 2:03:32, his second quickest time ever and the seventh fastest in history.

The race had been billed as a clash of the all-time greats with Kipchoge taking on Ethiopian track legend Kenenisa Bekele, who ran the second fastest marathon ever to win the Berlin race in 2016, and former world record holder Wilson Kipsang, who became the fourth quickest man in history after chasing Bekele home in an epic battle 12 months ago.

But the three-way "dream match-up" failed to materialize as Bekele and Kipsang both dropped out in the second half of the race, leaving the day's surprise package Adola to take on Kipchoge.

The 2014 world half marathon bronze medalist at first took the initiative from his illustrious opponent but Kipchoge never looked troubled and eventually eased clear in the final 2km to reclaim the Berlin crown he'd won in 2015 and become the first man to notch up six Majors victories since the series began in 2006.

Kipchoge now joins fellow Kenyans Geoffrey Kirui and Daniel Wanjiru at the top of the men's leaderboard while Adola, who finished in 2:03:46, moves alongside his countrymen, Bekele and Tamirat Tola in joint second.

Mosinet Geremew picked up nine points for placing third in 2:06:09 with Kenyans Felix Kandie and Vincent Kipruto in fourth and fifth, clocking 2:06:13 and 2:06:14 respectively.

Cherono also regained the Berlin crown from two years ago as she outfought Ruti Aga and Valary Aiyabei to win in 2:20:23.

The race was between these three plus Amane Beriso until 30km where Bariso fell back. Cherono then forged on ahead of her two rivals, eventually opening daylight at 40km before claiming victory by 18 seconds.

Ethiopia's Aga clinched the 16 runner-up points, moving up from third last year to place second in 2:20:41, with Ayabei third this time in 2:20:53. There were also points for Helen Tola in fourth and Germany's Anna Hahner, who was fifth in 2:28:32.

There was no stopping Hug and Schär in the wheelchair events as the Swiss pair dominated their races from the start to win by more than three and a half and more than five minutes respectively.

Hug leapt to the top of the men's standings after powering home in 1:29:03 well ahead of two Japanese men, Kota Hokonuie and Ryota Yoshida. It was a first Series XI victory for the racer who dominated Series X but was beaten by Britain's David Weir in London earlier this year.

Schär's victory puts her in a commanding position at the top of the women's table after she won in 1:40:05. Fellow Swiss Sandra Graf took the runner-up spot in 1:45:24 with Germany's Annika Zeyen a surprise third.

There were also points for Patricia Keller of Switzerland in fourth and Britain's Mel Nicholls in fifth.