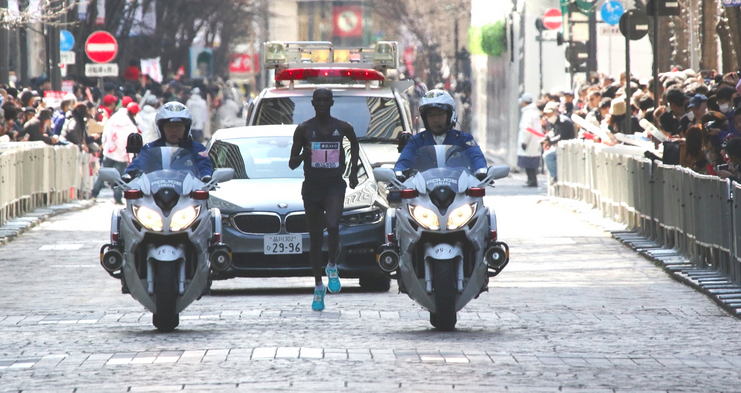 Wilson Kipsang will leap to the top of the men's leaderboard if he can retain his Tokyo Marathon title on Sunday, 25 February, when Series XI of the Abbott World Marathon Majors resumes in the Japanese capital.

The former world record holder cruised to a Japanese all-comers' best of 2:03:58 on Tokyo's new faster course 12 months' ago, and the Kenyan could make history this year if he can repeat his victory, becoming the first man ever to win back-to-back Tokyo Marathon titles.

The former Majors champion finished second in the TCS New York City Marathon last November and a repeat Tokyo victory would take him from 10th to first place in the standings on 41 points with just two races to go in Series XI. He would jump ahead of five men currently share top spot with 25 points apiece from one victory each.

Kipsang ran at world record pace to 30km last year and the 35-year-old will have that target in his sights again when he defends his crown against fellow Kenyans Gideon Kipketer and Dickson Chumba, who placed second and third behind him in 2017. Chumba was Tokyo champion in 2014 and will be keen to get back on top of the podium after finishing third for the last three years.

Feyisa Lilesa is another former champion who could pose a threat to Kipsang. The Rio Olympic silver medallist triumphed on the old course in 2016 and finished joint second in the Series IX standings.

The US-based athlete is joined this year by fellow Ethiopians Tesfaye Abera and Tsegaye Mekonnen who have both run quicker than 2:05 to win the Dubai Marathon in recent years.

The battle for points will be equally fierce in the women's race with Ruti Aga hoping to join Mary Keitany and Tirunesh Dibaba at the top of their leaderboard. Aga was second in the BMW Berlin Marathon last September and a first Majors victory would take her level with last year's London and Chicago Marathon winners on 41 points.

Aga holds the quickest time in the women's field of 2:20:41 and may well have Sarah Chepchirchir's course record of 2:19:47 in her sights.

She will have to overcome some stiff opposition, however, not least from fellow Ethiopian Berhane Dibaba, who was second last year after winning the Tokyo title in 2015. Shure Demise, who broke the world junior record in 2015, will also be in the hunt, as will Meseret Defar, the two-time Olympic and world 5000m champion who makes her marathon debut at the age of 34.

The Kenyan threat comes from Helah Kiprop, who won the Tokyo title in 2016 and was a World Championship silver medallist in 2015, plus Purity Rionoripo last year's Paris Marathon champion who is in touching distance of a sub-2:20 time.

USA's ever-consistent Amy Cragg could also move up the leaderboard if she can add to the nine points she picked up for winning a World Championship bronze medal in London last summer.

Points are up for grabs in the wheelchair contests too where Swiss pair Marcel Hug and Manuela Schär could clinch the Series XI titles.

Hug is sitting supreme at the head of the men's standings with 91 points from four races after winning in Berlin, Chicago and New York last autumn following his runner-up spot behind Britain's David Weir in London last April.

The inaugural World Marathon Majors wheelchair champion will seal the Series XI crown if he can claim the Tokyo title for the first time on Sunday. The so-called Silver Bullet suffered his only defeat of the Series X campaign in Tokyo 12 months ago when he suffered a shock defeat to Japan's Sho Watanabe.

Course record holder Kurt Fearnley will also be on Hug's tail. The Australian lies second on the leaderboard and will hope to close the gap on Hug by regaining the Tokyo title he won two years ago. South Africa's Ernst van Dyk and world record holder Heinz Frei could also pick up points.

Schär was also beaten to the line in Tokyo last February and the world record holder will hope to make amends when she takes on defending champion Amanda McGrory and reigning Majors champion Tatyana McFadden.

Schär holds a 43-point lead over the US pair with three wins from four races and knows a fourth victory would be enough to secure the Series XI winners' prize. But the Americans finished ahead of her in Chicago last October and will work together with training partner Susannah Scaroni to keep the series alive.