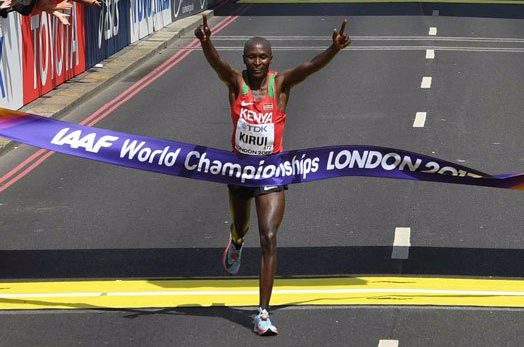 Kenya's Geoffrey Kirui and Bahrain's Rose Chelimo struck gold on the streets of London as they won the IAAF World Championship marathons on Sunday.

The victories for Kirui - the reigning Boston Marathon champion - and Chelimo also ensures the pair move to the top of the Abbott World Marathon Majors Series XI leaderboard with two rounds now complete.

Kirui showed great race craft in a fascinating battle with Ethiopia's Tamirat Tola, whose personal best (PB) of 2:04:11 made him the fastest man in the field.

The two broke away from the rest of the field on the third of four laps of the London 2017 marathon course.

Tola then powered clear of Kirui at the 19-mile mark with what looked to be a race-winning effort. But the 24-year-old Kenyan proved he had managed his resources better than his East African rival and within two miles had reeled Tola back in.

Tola tried gamely to hang on to Kirui but the elastic snapped as they raced down the Embankment on the final lap of the course.

Once in front Kirui never looked like relinquishing the lead and broke the tape on Tower Bridge in a time of 2:08:27 to become Kenya's fifth world marathon champion.

Kirui said: ""This is the best moment of my career, easily. I am so happy to win the world title because it is my first time at these Championships.

"Winning this title has been my goal for so long. Now my goal will be to repeat it."

Behind Kirui, Tola found himself in a real battle to hold on to the silver medal with Tanzania's Alphonce Simbu finishing strongly.

Tola had just enough energy reserves left to cross the line in the silver medal position in 2:09:49 but had to receive medical treatment to recover from his efforts. Simbu had to settle for the bronze medal just two seconds back in 2:09:51.

Home favorite Callum Hawkins (Great Britain) was next to cross the line in a superb personal best (PB) of 2:10:17 while Gideon Kipketer (Kenya), who had tried to go with Kirui and Tola when they made their decisive break, finished fifth in 2:10:56.

The result meant Kirui is joint top of the Abbott World Marathon Majors leaderboard alongside his Kenyan compatriot Daniel Wanjiru who won the first race in the series, the 2017 Virgin Money London Marathon, but could only finish in eighth place on his return to the streets of London in the IAAF World Championship marathon.

The women's race was a cautious affair until the final of the four laps when the pace picked up and a large field was whittled down one-by-one with the USA's Amy Cragg doing the damage at the front.

As the race splintered, Chelimo seized her chance to attack with only Edna Kiplagat (Kenya) able to respond.

These two had done battle in this year's Boston Marathon with Kiplagat – who has two previous World Championship gold medals in her trophy cabinet – emerging victorious.

But this time Chelimo turned the tables as she forged ahead and just clung on for the biggest win of her career in 2:27:11.

Chelimo said: "It was sweet revenge for me because she beat me in Boston Marathon in April and I have done the same here and we are friends."

There was a thrilling finish for the medals behind her with Kiplagat just holding off Cragg as the result came down to fractions of a second, with both women given the same finishing time of 2:27:18. Cragg had already stormed past Flomena Daniel (Kenya) in the final 400m before coming agonisingly close to winning a silver medal.

The Abbott World Marathon Majors will now sweep into the autumn marathon season with the BMW Berlin Marathon the next up on Sunday September 24.