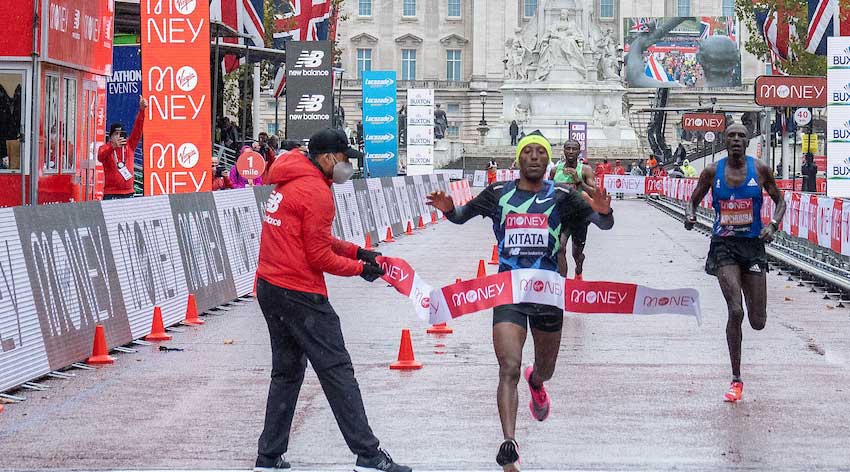 The pre-race talk was all about the head to head between Kipchoge and Ethiopian great Kenenisa Bekele, but with the Berlin 2019 champion's withdrawal on Friday, the way seemed clear for Kipchoge to claim another AbbottWMM win.

Few shots were fired as the race processed at a modest pace into the deep waters, and it began to become clear that Kipchoge was not going to execute a customary acceleration that would leave his rivals behind.

Instead, a group of six men were still in the hunt with a few miles left of London's biosecure, looped course, and then the unthinkable happened.

Kipchoge began to slip backwards until he was quickly out of touch, leaving Kitata, Vincent Kipchumba and Sissay Lemma leading the way.

Mosinet Geremew's fabled finishing speed was thought to be a factor until he lost touch with the front three, and the final stretch became an eyeballs-out sprint between Kitata and Kipchumba.

The huge Kenyan appeared to be edging it as they fought their way down The Mall, only for Kitata to fight back and hit the tape just one second in front.

It was a thrilling, if unexpected end to a highly anticipated race, and perhaps signaled the changing of the guard at the top of men's marathon running.

Kipchoge's first defeat since Berlin in 2013 may well have been a singular bad day at the office. The reigning AbbottWMM champion tweeted: ‚"After 25 kilometers my ear blocked and it couldn't open anymore. But this is how sport is, we should accept defeat and focus for the winning next time."

That will matter little to Kitata, who will go down in history as the winner of this unique London Marathon.