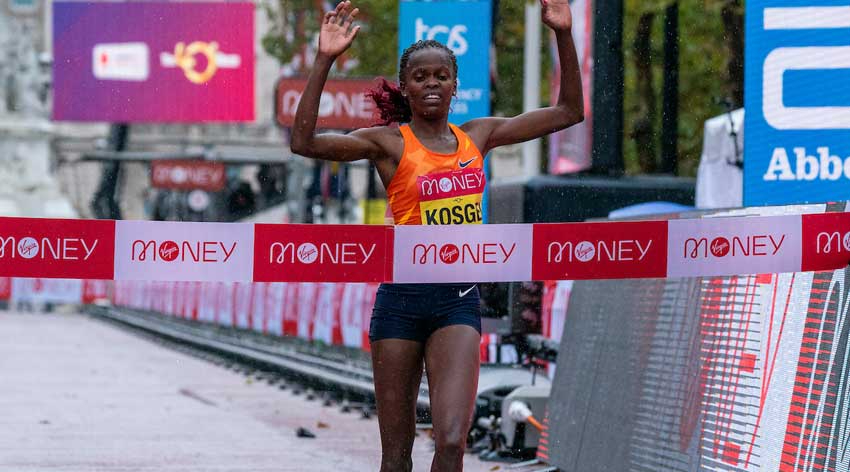 Kosgei reigns in the London rain

Brigid Kosgei retained her London Marathon title at a canter in the 40th running of this famous race.

The reigning AbbottWMM Series champion underlined her grip on women's marathon running with a dominant performance in the elite-only, looped course in the UK capital.

Kosgei was facing the unknown threat of world champion Ruth Chepngetich, and it quickly became a two-women battle for the title on the rain-soaked 1.3-mile circuit of St James' Park.

Once clear, the pair slowed after halfway and a game of cat and mouse ensued, with Chepngetich occasionally testing the resolve of the world record holder. But Kosgei had the answer whenever her rival attempted to open a gap.

The 20-mille marker was Kosgei's cue to make the decisive move, to which Chepngetich had no reply. The 25-year-old streaked clear to stop the clock at 2:18:58 for her second London crown and a win that hands her a maximum 50 points in AbbottWMM Series XIII.

Behind her, however, there were fireworks in the morning gloom. American Sara Hall - left to run large parts of the course alone - was carving her way through the field and found herself in third after muscling her way past Ethiopia's Ashete Bekere.

Chepngetich appeared too far ahead of the 37-year-old, but as they made their way for the last time down Birdcage Walk, Hall had more left in the tank, and began eating into the remainder of the Kenyan's advantage.

As they turned for home, Hall hit the afterburners and scorched her way to a hugely impressive second place.