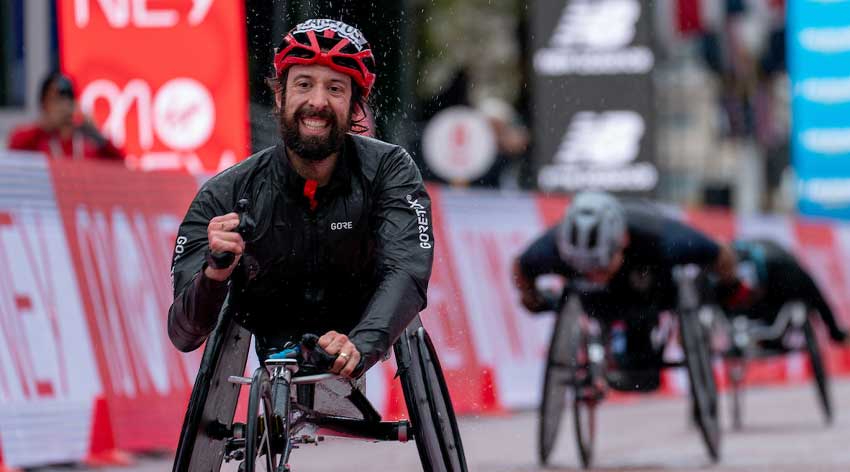 There were two upsets in the Virgin Money London Marathon wheelchair races today as Canada's Brent Lakatos and Nikita Den Boer from the Netherlands took their maiden London titles.

Lakatos outsmarted and outsprinted a pack of five other athletes to become the first Canadian winner of the men's wheelchair race in London for ten years, while Den Boer arguably pulled off a bigger surprise than the earlier defeat in the elite men's race for Eliud Kipchoge.

But the unheralded Den Boer showed no signs of being overawed by the fearsome reputation carried by the reigning AbbottWMM Series champion, and the pair traded turns on the front of a race they dominated from the gun.

It wasn't until the last of four sprint segments that the Dutchwoman made a break for it, and she quickly built a lead Sch√§r was powerless to haul back in.

The Swiss, who is no fan of cold, wet conditions, fell further behind, leaving Den Boer to coast down an eerily empty Mall in this elite-only biosecure bubble to take her first career AbbottWMM victory.

Sch√§r eventually finished over a minute behind her conqueror.

For Lakatos, this win after a tactical battle for the entire 26.2 miles sits nicely next to his 2018 triumph in Berlin and underscores the growing reputation he has as one of the sport's most dangerous sprinters.

It was that track-honed speed that served him so well as he rounded the final bend and sent his arms into overdrive to come home in front of David Weir, with Marcel Hug in third.