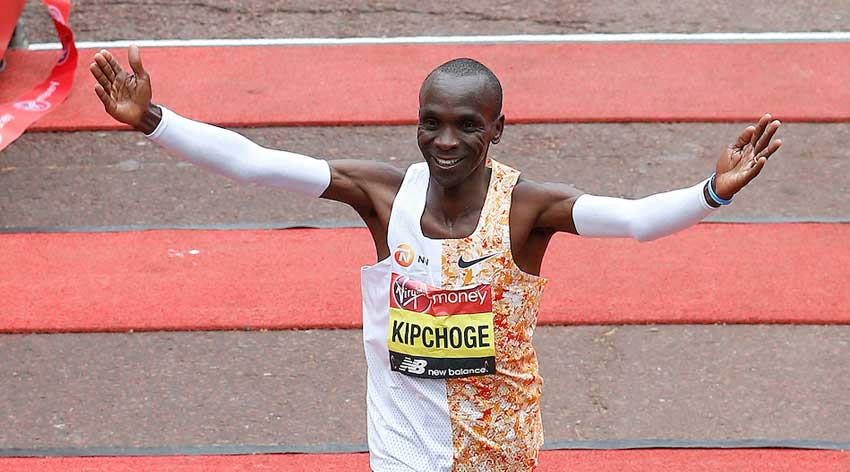 It's race week. A sentence we've been unable to utter since late February in the Abbott World Marathon Majors when we were preparing for Tokyo.

The 40th instalment of the Virgin Money London Marathon would have, in a normal year, monopolized the attention of the global distance running community during race week. Perhaps now it will do so more than anyone could have predicted given the lack of real-world action we have had in 2020.

While the masses tackle London's virtual version and the AbbottWMM Global Run Club challenges, there is the prospect of a thrilling set of elite races taking place within London's biosphere.

And what a prospect we have in store.

Instead of the usual 26.2 miles from Blackheath in south east London to the Mall in the heart of the city, a looped course of 2.15km will see reigning AbbottWMM men's series champion and world record holder Eliud Kipchoge take on the only man to have come anywhere close to his mark of 2:01:39, Kenenisa Bekele.

Bekele clocked 2:01:41 at the 2019 BMW BERLIN-MARATHON to set up this mouthwatering head-to-head, originally scheduled for April until the COVID-19 pandemic intervened, the pair will finally meet to find out who will emerge triumphant.

If anything, the switch from the established route to 19 loops of the circuit around St James' Park ramps the anticipation up further. This is uncharted territory for all the athletes and we will find out who can adapt and cope best to these unique circumstances.

While these two will garner the lion's share of the attention this week, they are joined by some other serious operators in the elite men's field.

Ethiopia's Mosinet Geremew came second in 2019 with 2:02:55, and was also the silver medalist in the 2019 world championships in Doha, where the marathon was held on a looped course. Mule Wasihun is the third returning podium occupant from last year's race.

She resumes hostilities with the 2018 London champion Vivian Cheruiyot, while world champion Ruth Chepengetich makes her AbbottWMM debut and Berlin 2019 champion Ashete Bekere lines up for her first tilt at London.

Kosgei, who is the reigning AbbottWMM Series champion, could have her sights set on her world record time of 2:14:04 with the aid of the pacemakers and what looks like a flat, fast circuit. Her battle with Cheruiyot in London stands at one victory each going into the weekend.

In the wheelchair races, there is no Daniel Romanchuk in London, which means a battle between old rivals David Weir and Marcel Hug could be on the cards, with Weir aiming for his ninth London win.

Women's wheelchair series champion Manuela Sch√§r is back to defend her London crown in what would be her third win in the UK capital and also her 10th consecutive AbbottWMM race victory, a milestone she been waiting to reach since winning in New York City in November 2019.

It's been more than two years since Sch√§r was beaten over the marathon distance and she will be a hot favorite for this race with the absence of her usual key competition. Shelley Woods flies the flag for the home nation and will be looking to cause an upset on the specially designed course.

It's a voyage into the unknown for all these athletes this weekend, and we cannot wait to see what unfolds.