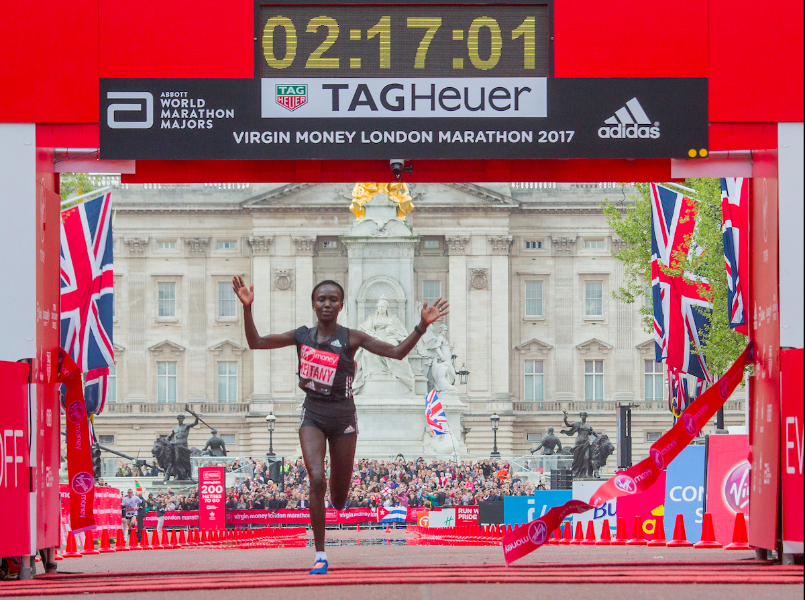 In the wheelchair race, Manuela Schãr (SUI) broke the wheelchair course record to clinch her first ever London title, and David Weir (GBR) became the most successful athlete in the event's 37-year history with his seventh win.

As part of the new AbbottWMM charity program, a total of $40,000 will be donated to charities in honor of today's four 2017 London Marathon champions. More information on selected charities will be released soon.

The dominance of Keitany, a three-time New York champion, was clear from the start today when after two miles she broke clear of the pack. She went on to run the quickest first half ever seen and to smash the 30K world record.

Behind her, Tirunesh Dibaba clocked 2:17:56 to become the third quickest woman in history and claim the Ethiopian record, while her compatriot Aselefech Mergia, 2010 London champion, was third in 2:23:08.

�"I never expected Mary to sprint away so fast at the beginning and maintain it," said Dibaba. �"I followed my own pace and am happy to have a personal best, but I would have preferred to come first."

The 32-year-old won the Boston Marathon in the fastest wheelchair time in history last Monday and today clocked 1:39:57 to knock almost two minutes off the best-ever London time from Tatyana McFadden, the current AbbottWMM Wheelchair Series champion. McFadden did not compete today as she is still recovering from surgery earlier in the year.

�"It's incredible," said an ecstatic Sch�r afterwards. �"It's been such a great week with Boston and London. I have no words."

�"I am really happy with my time and I think it's extremely close to a PB," said McGrory, who won the London crown in 2009 and 2011. �"I'm a little bit disappointed not to hang on to Manuela, but my biggest aim this year was to crack the podium and I've done that now.

�"The crowd was amazing. Since the 2012 Paralympics, there's been a big push for Paralympic sports. The Abbott World Marathon Majors have done big things for wheelchair racing."

McGrory's University of Illinois teammate, Susannah Scaroni, was third in 1:47:37.

Weir produced a devastating sprint to beat reigning AbbottWMM Wheelchair champion Marcel Hug in the men's wheelchair race after a 15-strong group entered The Mall together.

Hug usuallybeats all-comers, but Weir was determined to hit the record books as he powered away from his Swiss rival to cross the line in 1:31:06.

The Briton, who first won the race in 2002, finally moved ahead of Tanni Grey-Thompson at the top of the all-time London Marathon winners' board. He had shared the record of six wins with Baroness Grey-Thompson since 2012, finishing second, second and third over the last three years.

But today he felt different following his recent Paris victory and unlike his counterparts he did not compete in the Boston Marathon, meaning he could concentrate on this race.

�"It hasn't really sunk in yet," said an emotional Weir afterwards. �"It's the first time I've felt comfortable for years to be honest."

It's been a turbulent few months for the 37-year-old, who announced his retirement from track athletics in January.

Determined to return to his favourite marathon for what he hinted could be the last time, Weir showed everyone today that he still has the passion and talent to be among the world's best on the road.

Hug was just one second behind with Australia's Kurt Fearnley snatching third in 1:31:07.

In the men's elite race, the 24-year-old Amsterdam champion Wanjiru made his break rather later, the Kenyan going clear with five miles left to leave a string of world-class athletes behind him. But Bekele dragged himself back from outside the top 10 to come within a whisker of triumph, in the end finishing just eight seconds behind the winner with Bedan Karoki (KEN) third on his debut.