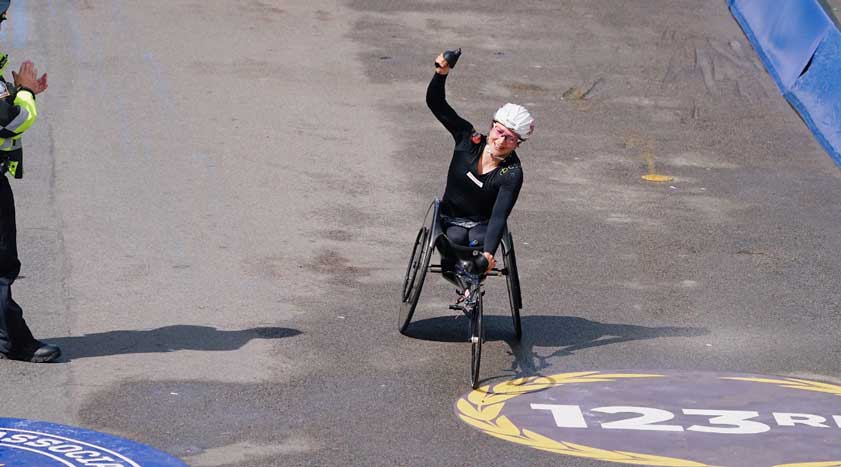 Daniel Romanchuk extended his lead at the top of the Abbott World Marathon Majors Series XII leaderboard with a convincing win at the 2019 Boston Marathon.

It was Romanhcuk's first win in Boston and he became the first American to win the men's wheelchair division since 1993. The 20-year-old didn't handle the first downhill section well and the early lead was shared by veteran Ernst van Dyk and American Aaron Pike.

But Marcel Hug, Masazumi Soejima and Romanchuk soon reeled that pair in and began to break away.

Romanchuk put in a burst towards the halfway mark where he was able to collect the eight AbbottWMM bonus points and from that point his lead never came under threat.

Hug's victory in Tokyo had taken a significant chunk out of Romanchuk's Series XII lead and there were two points in it coming into today's clash.

But with a full 33-point haul from this win, Romanchuk's advantage has now been widened to 26, with Soejima separating the winner and Hug who trailed in third.

The women's race was yet another tale of Manuela Sch√§r competing against herself. The reigning Series champion had failed to finish here in the freezing conditions of 2018 but she would not be denied today.

She stole a large advantage immediately in the downhill section and was clear of the rest long before the Newton hills could give them a chance to eat into her lead.

With the win and the bonus points from today, Sch√§r has achieved the maximum points possible in this series, and now heads to London bidding to make it six wins in a row in the Abbott World Marathon Majors.

You can read a report on the open division races here.