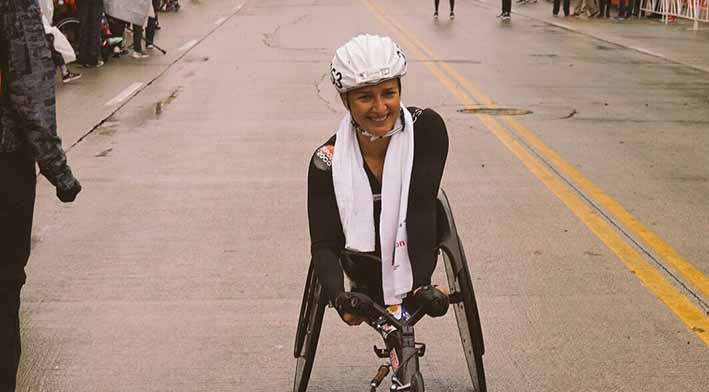 Manuela Schär continued her dream start to the AbbottWMM Series XII with victory at the Bank of America Chicago Marathon.

The Swiss star battled to half way with Australian Madison de Rozario before her strength allowed her to pull clear in the wet conditions and romp home by over a minute.

Schär's form was obvious to all after she smashed the world record at the BMW BERLIN-MARATHON in September and she underlined that here with her first win in Chicago.

De Rozario snatched the eight points for the wheelchair bonus competition which was at the halfway mark to move into second place in the overall Series XII standings, but Schär's lead has now stretched out to 34 points with just two races gone.

She next heads to the TCS New York City Marathon where she won comfortably last year.

Susannah Scaroni continued her promising start to the Series with third place adding to her second place in Berlin.

In the men's wheelchair race, there was joy for the home crowd as local favourite Daniel Romanchuk claimed his first victory.

The 20-year-old, coached at the nearby University of Illinois, did battle with two titans of the sport in Marcel Hug and David Weir and emerged triumphant for the first time against his vastly experienced foes.

Having bested them for the eight bonus points at the midway point, Romanchuk hung with his fellow front runners the whole way. When the hammer came down from Hug as they ascended Roosevelt Road, Romanchuk responded with those enormous arms and was able to edge ahead of the Swiss superstar in the sprint for the line.

Weir had to settle for third, while Romanchuk now has a slender one-point lead in the Series XII standings and a huge injection of confidence that he has truly arrived.