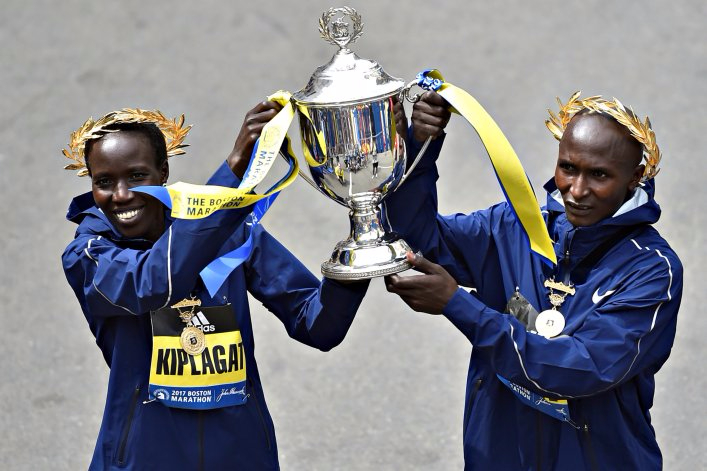 Kenyan and Swiss athletes were the winners today as Series X of the Abbott World Marathon Majors came to a thrilling conclusion at the 121st Boston Marathon with just six days to go before Series XI kicks off at the 2017 Virgin Money London Marathon on April 23.

Geoffrey Kirui and Edna Kiplagat broke clear of world class fields to win the men's and women's elite races for Kenya, while wheelchair racers Marcel Hug and Manuela Sch�r made history for Switzerland as they took advantage of the warm conditions and light tailwinds to record the fastest wheelchair marathons ever seen.

Hug has dominated the inaugural AbbottWMM wheelchair series and he ended it in style with his seventh win from the eight-race, year-long contest, followed a few minutes later by Sch�r who closed the gap on series winner Tatyana McFadden to 18 points with a superb solo victory.

Twelve months ago, Hug held off Ernst van Dyk and Kurt Fearnley on the line as he started a winning streak that brought him Paralympic gold in Rio, plus victories in London, Berlin, Chicago and New York. This time, it was only 10-time Boston winner Van Dyk who could stay with the Silver Bullet as he fired away from the rest of the field to clock 1:18:04.

The pair were already clear by half way and they entered the final stretch in Boylston Street together. Van Dyk challenged with 100m to go, but Hug is a master of the sprint and he reproduced his trademark finish to secure his third consecutive Boston Marathon victory.

Van Dyk was given the same incredible time of 1:18:04, 23 seconds faster than his personal best set in Boston back in 2004, and 21 second faster than Josh Cassidy's 2012 course record. Japan's Hiroyuki Yamamoto was third in 1:19:32, almost a minute ahead of Fearnley.

In the women's push rim race, McFadden's four-year winning streak came to an end. The US star, who has won every Boston Marathon since 2013, could only place fourth as Sch�r powered away from the field from the start and never looked back.

The 32-year-old, who placed second four times behind McFadden last year, won by almost five minutes in 1:28:17, breaking the Boston course record and the world's fastest ever time by nearly six minutes.

�"Finally, finally, after so many second places I am in first place," said the delighted Sch�r afterwards.

Behind her, Amanda McGrory and Susannah Scaroni also broke the old course record, recording 1:33:13 and 1:33:17 respectively, while McFadden clipped one second from her own quickest Boston Marathon time in 1:35:05 despite suffering from life-threatening blood clots that forced her to pull out of the Tokyo Marathon at the end of February.

While Hug and McFadden were already assured of their Majors titles, there were still points and places to play for on the women's leaderboard where Kiplagat moved into second place as she ran away with the Boston race to win by almost a minute in 2:21:52.

Kiplagat now has 41 points, seven ahead of her namesake Florence. On the leaderboard she now trails Jemima Sumgong, whose positive doping results at a February out-of-competition test will be investigated.

The 38-year-old former London Marathon champion showed why she has two World Championship and two Abbott World Marathon Majors titles to her name as she put her foot down with 10km to go to open up an unassailable lead.

Within no time, Kiplagat opened a 100m gap, hauling herself up Heartbreak Hill ahead of fellow Kenyans Gladys Cherono and Valentine Kipketer, with former Kenyan Rose Chelimo of Bahrain giving chase and US newcomer Jordan Hasay in hot pursuit.

Kirui won by a smaller margin but his victory was every bit as decisive as he kicked clear of USA's Olympic bronze medallist Galen Rupp over the last 5km to win in 2:09:37.

It was another Kenyan, the former Abbott World Marathon Majors champion Emmanuel Mutai, who dominated in the early stages, leading a group of 10 through half way in 64:35. But he lost touch before 30km where Rupp was prominent among seven men, his countryman Abdi Abdirahman among them.

Seven became six as defending champion Lemi Berhanu Hayle dropped behind before Rupp and Abdirahman powered through the Newton Hills with Kirui. The sweeping inclines ended Abdi's challenge as Rupp hung onto Kirui's shoulder and the unheralded Japanese runner Suguru Osako made up ground in third.

Kirui gave Rupp a couple of glances before pulling smoothly away with a 14:35 split between 35 and 40km to win by 21 seconds.

Kirui's victory means he moves up to joint fifth in the Series X standings on 25 points as London and Olympic champion Eliud Kipchoge is crowned men's champion.

Now all eyes turn to London where Series XI starts on Sunday with a brand new format and a new set of prizes.