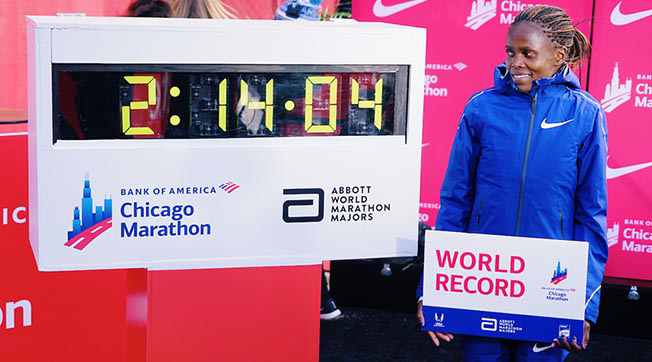 Series XIII - The story so far

Series XIII of the Abbott World Marathon Majors approaches its winter break with no shortage of thrilling action already in the books.

The fall began with the crowing of our Series XII champions in Berlin.

Brigid Kosgei, Eliud Kipchoge, Manuela Sch√§r and Daniel Romanchuk all sealed their silver platters, with Sch√§r topping out her campaign by winning all seven races in the series.

We barely had time to breathe before Series XIII began two weeks later with an astonishing performance from Kosgei.

The 25-year-old obliterated Paula Radcliffe's 16-year-old world record by over a minute at the Bank of America Chicago Marathon.

The Kenyan star blew her opposition away with a time of 2:14:04 to re-write the history books and begin her defense of the series crown in style.

Kosgei is gradually putting together a marathon career that may one day rival the glittering achievements of her compatriot Mary Keitany, whose women's only world record of 2:17:01 (set without the use of male pacemakers) will surely be the next target coming into range for the woman from Kapsait.

Keitany went in search of her fifth TCS New York City Marathon title on the first weekend in November, but was denied by another rising star from Kenya.

Joyciline Jepkosgei's stunning debut performance (2:22:38) meant Keitany had to settle for second place, and set up the tantalizing prospect of the half marathon world record holder facing off against the new marathon record holder -- perhaps in the spring of 2020?

The men's division is also full of mouth-watering prospects as we look ahead to 2020.

Following his astonishing sprint finish earlier this year in Boston, Kenya's Lawrence Cherono repeated the dose in the Windy City to out-kick Dejene Debela and Asefa Megstu on the Columbus Avenue home stretch and begin Series XIII with a win, signaling his credentials as a pretender to Kipchoge's throne.

The great man has been AbbottWMM champion for the last four series', but is yet to take the stage this term after focusing his efforts on the successful INEOS 1:59 project.

Mesmerised by his feat on Prater in Vienna, fans of the sport wondering what will come next need look no further than the showdown everyone hopes will take place at an AbbottWMM race in 2020.

Kipchoge's achievement in Austria does not count as an official world record. That honor belongs to the 2:01:39 he recorded at the 2018 BMW BERLIN-MARATHON, and there is now an athlete who has shown he could threaten that mark.

In September, Kenenisa Bekele, aged 37and written off by just about every insider in the sport, came roaring back onto the scene in the very same city to clock a time of 2:01:41 -- just two seconds outside Kipchoge's record.

We wait with bated breath to see if this pair will meet on the road this coming spring, but the New York City victory of Geoffrey Kamworor -- Kipchoge's training partner and the current half marathon world record holder -- and Cherono's burgeoning reputation suggest the two elder statesmen will not have it all their own way if we see this quartet collide next year.

In the women's wheelchair division, Switzerland's Sch√§r continued to lay down chapter after chapter of one of the most dominant periods any athlete -- of any sport -- has enjoyed.

Her victory in the 2019 TCS New York City Marathon made it nine AbbottWMM wins in succession, a streak that brought her a second consecutive Series title.

As things stand, the 34-year-old is in pole position to make it three titles in a row if she can pick up where she left off when the series resumes in Tokyo on March 1.

If there is a blemish on Sch√§r's career record it is the absence of Paralympic gold. Few would bet against that being corrected next summer as she competes on track and road in Tokyo.

Her counterpart in the men's wheelchair division is also tightening his enormous grip on his sport.

21-year-old Romanchuk blasted his way to Series XII victory before the final race took place without him in Berlin, and then set about his defence by winning by over three minutes in Chicago to show his rivals that this boy is no flash in the pan.

In New York, he contended with threats from three vastly more experienced men as Marcel Hug, David Weir and his training mate Aaron Pike all chased him into Central Park. But they had no answer to Romanchuk's power, and he won by a second to extend his Series XIII lead.

And so we draw breath ahead of what promises to be an electrifying 2020.

The Majors, as always, will supply a catalogue of world class performances across the boardand, with the Tokyo Olympic and Paralympic marathons also in the mix, it promises to be another year that delivers champions who will live long in the memory.