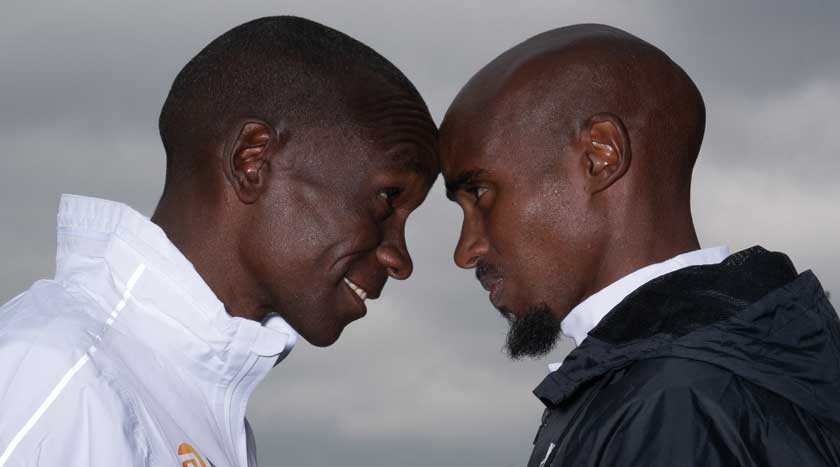 Eliud Kipchoge is gunning for history on two fronts as he sets his sights on an unprecedented fourth AbbottWMM series crown and also aims to be the first man to win four London Marathons.

The Kenyan can move to 50 points if he can add another 25-point haul to the one he secured when setting his new world record of 2:01:39 at the BMW Berlin Marathon in September 2018.

But home town favourite Mo Farah finds himself in exactly the same position following his first AbbottWMM win in Chicago last October. No one has beaten Kipchoge over 26.2 miles since 2013, however, and Farah is under no illusions about the size of the task in front of him.

‚"Racing against Eliud in London last year felt like having to learn the hard way -- but I believe I did learn a lot," said Farah.

‚"I'm going to go out there and give it my best and sometimes you end up coming first, and sometimes you get beaten by the better man and you have to accept that, go back home and say ‘what do I need to change to beat him?'"

The women's AbbottWMM title could also come close to being decided in London with the presence of three women who already have Series XII wins on their record.

Mary Keitany torched the field in New York in November to set herself up for a second straight series victory, but the up-and-coming Brigid Kosgei looked impressive in her win in Chicago and Gladys Cherono's second consecutive Berlin success in a course record time also makes her a live threat in London.

The women's wheelchair series is all over bar the shouting with Manuela Sch√§r streets ahead of her rivals after winning every race in the series so far. Victory here will seal a clean sweep of Majors for the reigning series champion.

The race is also doubling as the World Para Athletics Marathon Championships, and there is the added incentive of an extra eight series points and $10,000 in prize money for the fastest racer through the new Flying 400 section. The stretch just after Tower Bridge could see sparks fly if the pack is together in the wheelchair races.

On the men's side of the wheelchair action, America's Daniel Romanchuk has taken a firm grip on the leaderboard following a convincing win in Boston. He has swept all three of his home soil races and was second behind Marcel Hug in Tokyo. The 20-year-old is 26 points ahead of Hug and can reach his maximum of four race wins with what would be a maiden London victory.

To do so he will have to get past David Weir on the Briton's 20th consecutive outing in his home city. Weir has claimed the last two London titles and is the man to beat on a course he knows so well.

Once the elite action is over, the focus will switch to the 567 runners hoping to earn their Six Star Medal on Sunday as we anticipate the total of Six Star Finishers passing the 6,000 mark.