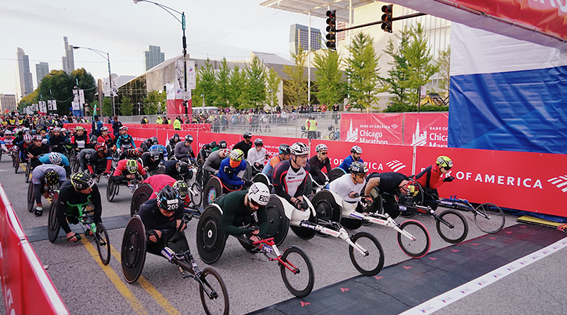 Stars of the road rule on the track

It's been a thrilling week of competition at the World ParaAthletics Championships in Dubai, with many of the stars of the Abbott World Marathon Majors wheelchair circuit in action.

The championships showcased the impressive range these athletes have, switching from a grueling 26.2miles to the shorter distancesfrom 100m up to 5,000m when it comes to track racing.

Zou finished in third at the 2018 TCS New York City marathon but has yet to find her way to top spot of an AbbottWMM podium.

It was also a great week for two more seasoned AbbottWMM campaigners.

American Amanda McGrory, having spent much of the last 12 months on the sidelines, underlined her return to fitness with silver medals in the T54 400m and 800m finals plus bronze in the 1,500m.

The University of Illinois athlete had returned to the roads with a bang in the fall, finishing second in Berlin, third in Chicago and fourth in New York City.

McGrory's fellow American Susannah Scaroni -- third in New York at the start of the month -- also took home some hardware, claiming bronze in the T54 800 and 1,500m.

Australia's Madison de Rozario capped a fine year in which she finished third in AbbottWMM Series XII with gold in the T53 800m and two silvers in the T54 1,500 and 5,000m.

Her fellow Australian Eliza Ault-Connell was also among the medals with a T54 400m bronze.

In the men's championship, AbbottWMM champion Daniel Romanchuk added to his growing collection of titles with T54 800m gold, edging road rival Marcel Hug into second place, which is becoming a familiar scenario between these two.

Canada's Brent Lakatos, who exploded onto the AbbottWMM scene in 2018 with victory at the BMW BERLIN-MARATHON and came third in Series XII, bagged two golds in the T53 100m and 800m and added a sliver in the T53 400m.

The year is not done yet for some of the major players in the AbbottWMM series.

In the women's race, double AbbottWMM Series champion Manuela Sch√§r is in town gunning for her tenth marathon win in a row.

She is joined by Scaroni and the Dutch athlete Margriet van den Broek, who joined those two as a Six Star Finisher in Tokyo earlier this year.

They will all be looking to topple last year's Oita champion, home grown favorite Kina Tsubasa.