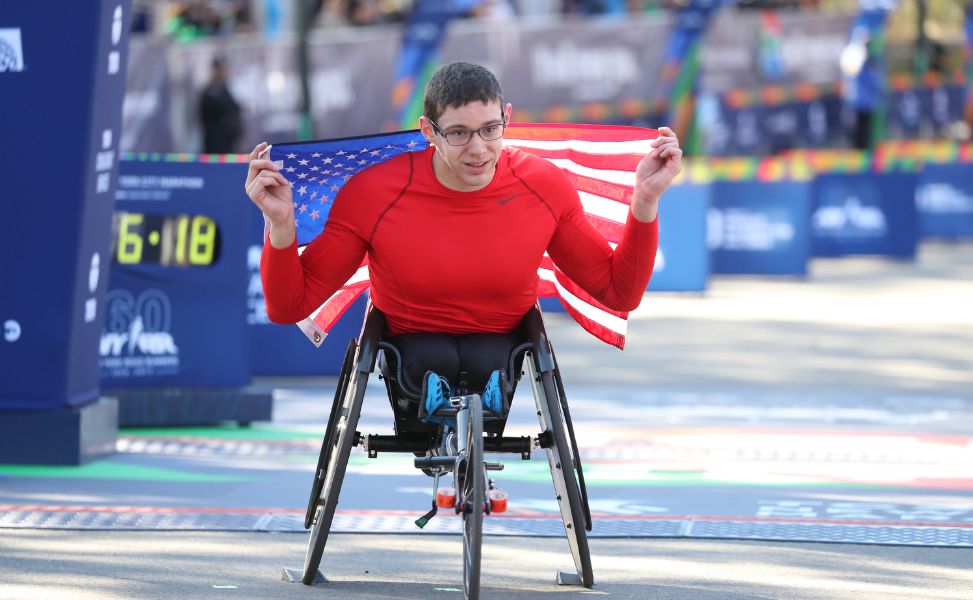 Three races in - what we know so far

We are just three races into series XII of the Abbott World Marathon Majors, and it has already been one for the history books. As we pause for breath before Tokyo on March 3, here are six things we've learned so far.

1.Manuela Schär is all kinds of awesome

The reigning women's wheelchair champion had already shown her class by winning Series XI, despite a few challenges late on when she had to pull out in the freezing weather of Boston 2018 and then losing out in a bunch sprint in London a week later.

She took the silver salver home nonetheless for a series that saw her set a new world best in Boston in 2017, then winning in London 2017 and following that with victories in Berlin and New York before wrapping up the top spot with victory in Tokyo.

Having had a scintillating summer on the track, she returned to the AbbottWMM circuit and has conquered all before her so far. Schär won by a country mile in Berlin in a new world record time of 1:36:53, and dominated in Chicago to earn a first victory there.

But the 33-year-old was given a completely different test in New York last month. Schär has invariably won by getting as far ahead as she can from any of her rivals, a plan based on the knowledge that she does not have as strong a sprint as some. So in New York, the odds were against her when she was left in a wheel-to-wheel battle with Tatyana McFadden, whose superior strength is suited to New York's hills.

Schär stuck to her task, and was eventually able to escape inside the last mile to snatch victory. She has now won all three races in Series XII and has shown her rivals she can win in more than one way. Will anyone stop her in the spring?

2.Kipchoge is the King

It was hardly in doubt before the start of this Series, but Eliud Kipchoge took his running royalty status to new levels when he set a jaw-dropping new world record in the German capital at the BMW BERLIN-MARATHON.

Kipchoge's time of 2:01:39didn't just set a new mark, it has the potential to have ended the conversation about anyone else getting close for a generation. The term G.O.A.T stands for Greatest Of All Time so it was no surprise to see the goat emoji in overdrive on social media that Sunday. What else can this marathon master achieve?

The whispers had been there for a year or so - a kid making his way in the sport of wheelchair marathon racing who had the potential to be great- maybe the greatest.

AbbottWMM went to visit him at his University of Illinois training base this summer to see what this youngster was made of.
Then, just a matter of days later, he broke through in style and defeated the legend Marcel Hug in a home straight sprint to win the Bank of America Chicago Marathon.

He followed it up by duking it out through the five boroughs of New York City with Hug and David Weir until turning up the heat to leave them trailing him home in Central Park.

The Romanchuk train has only just started rolling, andit's going to take some stopping.

In November 2017, Mary Keitany was dethroned in New York City by Shalane Flanagan. Then she pitched up in London looking to lower Paula Radcliffe's mixed world record and wilted in the heat.

Just when we might have thought that the endless miles were catching up with the now-36-year-old, Keitany returned to the Big Apple in 2018 and simply blew them all away.

Her half marathon splits of 1:15:50 and 1:06:58 delivered her to the finish in the second fastest time ever set by a woman on New York's testing roads. On this form, perhaps another tilt at Radcliffe's numbers is not out of the question?

After breaking the British record for the second time this year with victory in Chicago, Mo Farah declared he can get even quicker as his marathon career matures.

Farah was a study in control as he waited for his chance in the Windy City, slowly allowing the front runners to fall away before unleashing that famous track speed to leave the last man on his shoulder in his rearview mirror.

We await to find out if there will be another Farah/Kipchoge showdown in London next April to see just how fast Mo can really go.

6.This is the greatest road show on earth

The Abbott World Marathon Majors continues to soar in popularity, from record ballot entries in London and Tokyo, to largest ever field sizes in Berlin, Chicago and New York, and a surge in qualification attempts for Boston.

We like to call this series ‘Where Champions Run', not just because the world's best turn up to do battle, but because of the tens of thousands behind them, our everyday champions, who make each race day so spectacular.

Do we really have to wait three months before the next instalment?